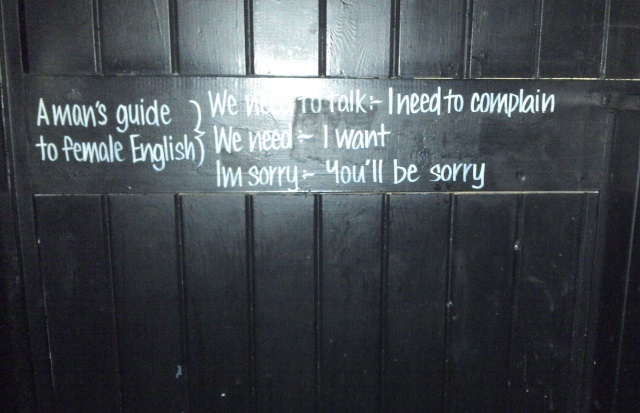 This pub has been selected by our editorial team thanks to its amusing artwork and bon mots.

"Reality is an illusion created by a lack of alcohol." (NE Simpson)

The Shaston Arms is a nook-and-cranny strewn pub a stone's throw from Carnaby Street. It's a place of two halves, quite literally, with a wall running down the middle and an entrance on each side...a bit like that old episode of Steptoe and Son, where our heroes divided their home in twain. The back of the pub has a glass ceiling, which provides handy light given the building is long and thin — Lord knows how dark it would get without it.

Its main distinguishing feature is the selection of witticisms written on the walls.

"I've stopped drinking, but only while I'm asleep." (G Best)

There isn't an enormous selection of beer, but those on tap are supplied by the Badger brand of the Hall & Woodhouse Brewery of Dorset. Shaston, it transpires, is the medieval name for the town of Shaftesbury in Dorset, a town that is lovingly depicted among artwork across the walls (plus some standard pictures of London).

Oddly, though there's no food served there is a dumb waiter in the back of the pub. There was also, during our visit, a man taking photos and notes, but we chickened out asking him why in case he was the competition.

"If you yelled for 8 years, 7 months and 6 days, you would have produced enough energy to heat one cup of coffee. Hardly seems worth it." (Unattributed)