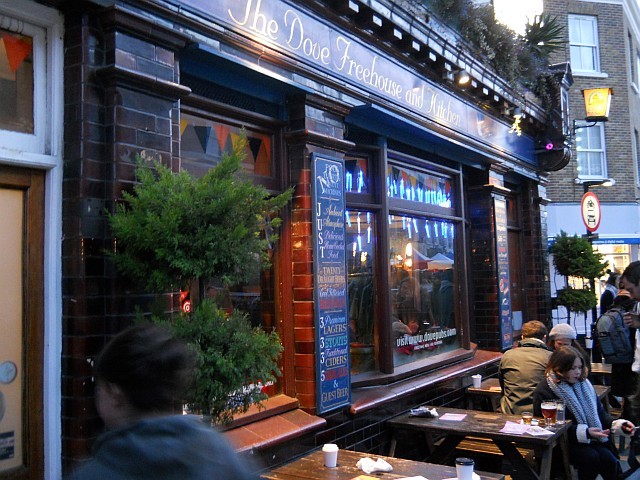 This pub was chosen for inclusion by the Londonist team, as part of the London Beer Quest series.

Bustling Broadway Market offers numerous drinking options, but none has a finer beer selection than The Dove, sister establishment to Clerkenwell's Dovetail.

The beer menu is a chunky leather-bound tome that could pass muster on the shelves of some of London’s most distinguished libraries. Which is fitting, since the experience of drinking here verges on the scholarly.

It is only those boasting the most encyclopaedic of beer knowledge who will come away without having learned something new. Sure, you may be able to reel off a list of the five Belgian trappist beers available here (Chimay, Westmalle, Orval, Rochefort and Achel), and even the sixth (St Sixtus). But have you ever tried the Gueuze (the ‘champagne of beers’, created by blending an old and a young lambic ale) and the red ‘wine beers’ from West Flanders (accurately described as ‘tart to the point of sourness’)?

Leafing through the pages of the menu, or surveying the sumptuous array of beer taps and bottles at the bar, there is certain to be something to pique the interest among the exhaustive range of (among others) golden ales, dark beers, fruit beers, wheat beers, and regional specialities. If it’s Belgian, and you’ve heard of it, then it’s likely to be here – alongside a fair number that you probably haven’t (the Dove boasts one of the widest ranges of Belgian beer in the country).

To help with negotiating the alcoholic labyrinth, the recommendations of beer expert Marc Stroobant are handily reproduced alongside the list of drinks – all the better to entice you to the bar, where the staff will be equally happy to assist.

For those unimpressed by all the continental sophistication, six rotating ales are also always on tap (often featuring several microbreweries), and a good range of food and wines complement the truly gourmet beer experience.

This is not a place for downing pints but for sipping your beer slowly and savouring the complex flavour. But though the produce is top class, the atmosphere, thankfully, is about as unpretentious as it’s possible to be on Broadway Market. It’s an excellent place to come for a quiet drink during the week, or for a more lively (and packed) scene at weekends. And if the strength, range and quality of the drinks tempts you into overindulgence, at least you can claim it was all done in the name of self-improvement.

Words and some pictures by Jonathan Knott.