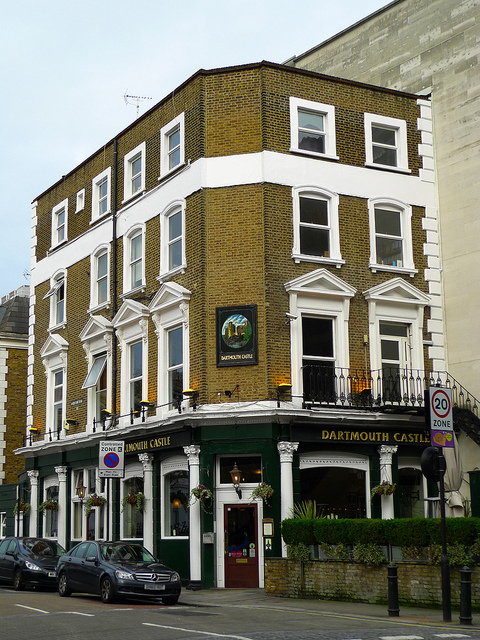 This pub has been included by the Londonist editorial team as a fine example of a quality gastropub.

While the Dartmouth Castle is certainly a gastropub, it needs no hint of the sneer that word occasionally induces. In addition to the food there are some fine beers, including offerings from Greenwich's Meantime brewery and, during our visit, a barrel or two of the prized Wandle ale from the Sambrook's Brewery a couple of miles to the south east. There is also a gigantic wine list.

Such liquids inevitably play second fiddle to a menu including braised oxtail, grilled Tuscan sausages and the pub's own 'Dartmouth Sandwiches'. Among the desserts you can find an 'Affogato' — vanilla ice cream with a shot of espresso. Pub grub this is not.

The pub sports decorative white plaster around lime green walls, which might prove faintly hazardous after a few glasses have been lifted. The artwork can best be described as 'arty', and some appeared to be for sale.

There is a handy outside area for when the pub gets packed, and it does so often. On our last visit the place was utterly heaving, and yet we were served by the efficient bar staff in seconds. There is much to commend a gastropub done well and the Dartmouth Castle fits snugly into that category.

Back to all Pubs Back to Hammersmith
Click for Comments