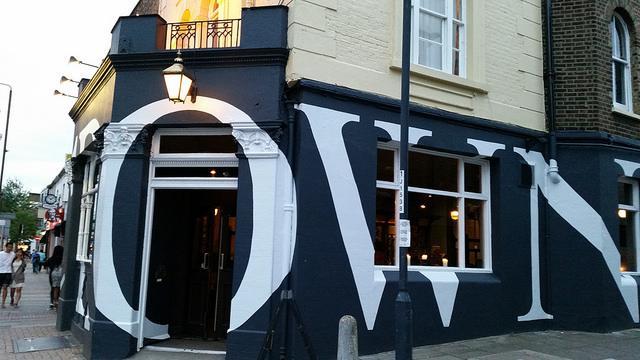 The Crown is another of those locals' pubs that's been taken over, given a wash and brush up and 'realigned' to appeal to that age 25+, young professional crowd. Now owned by the people who brought you The Dolphin in Sydenham, The Dartmouth Arms in Forest Hill and The Duke in Deptford, it's a lovely looking pub, the centrepiece of which is the Victorian-style bar complete with etched glass. We haven't yet had the chance to try out the two throne-style chairs, plus tapestry cushions, at one end of the room but they look perfect for winter cosiness. And for summer there's a nice beer garden out back.

Beer? There are plenty of ales on, with Kozel and Meantime in the lager corner, of which we heartily approve. You can also pick up Kernel and Camden Hells in bottles. Food is exactly what you'd expect from this kind of place (pulled pork burgers, ribs, falafel, fishcakes, whitebait and solid favourite desserts) — and if you're watching the pennies they do a daily lunch special for a fiver.

The pub's slightly out of the centre of Greenwich and we suspect word is still getting round; on a Saturday night in August 2014 it was pleasantly buzzing rather than heaving. Worth the extra walk or braving the mercurial timetable of the 180 bus.