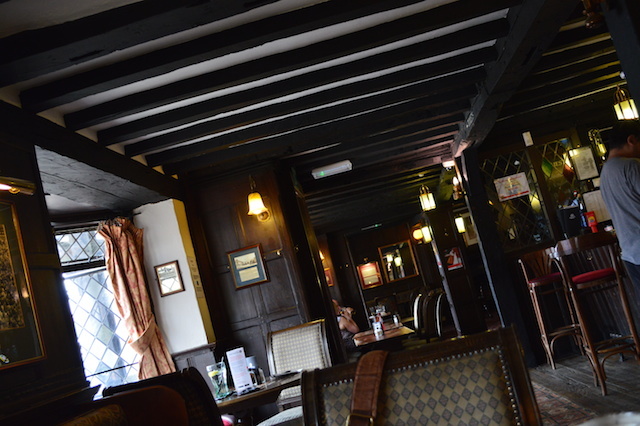 Pinner is one of the most pleasant little villages in Greater London. No surprise, then, that it also harbours a number of quality pubs. The Queen's Head is perhaps the most atmospheric, with its Tudor countenance and rustic charm. The inn dates back to at least 1540, but may have an antecedent from the time of Edward III. Either way, it feels bally old. Formerly called The Crown, it was 'only in 1715' that it got its modern name, presumably after Queen Anne. In a final historic note, Nelson's daughter Eleanor is said to have died in a riding accident outside the pub in 1872.

The interior holds much charm. The dark wooden beams of the timbered ceiling immediately knock you back a few centuries. The classic pub carpet and tatty seats then jolt you forward to the mid-20th century. The neat selection of craft ales reminds you that, yes, we're still in the good old 21st. Brews by Marlow and Portobello were on draught on our visit, along with a number of others, but you get the sense these things change around fairly often. The pub also claims to be the only one outside central London to serve Brewdog ales on cask, but we didn't see any on our visit. Bottles galore lurk in the fridge. All of this adds up to regular endorsements by CAMRA.

Out back, a sizeable and heated beer garden offers escape from the timewarpery. We didn't try the food, but the kitchen as a hygiene rating of five, suggesting they take things seriously.

Back to all Pubs Back to Harrow
Click for Comments