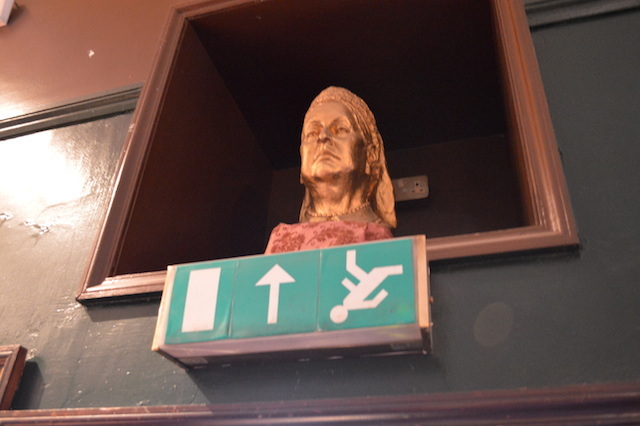 There's a board outside the Three Stags that proclaims it's 'sustainable', without actually explaining whether that means the food, the beer or the fact that the pub has so far survived the carnage of pub closures that's hit the capital. The explanation is that the Three Stags wins awards for its environmental sustainability, sourcing products from responsible suppliers and making sure their green credentials are held at the centre of all they do, which is a perfectly good reason for them to be included as one of the best pubs in the area.

There are a handful of tables by the busy junction outside but the inside is quite spacious and tall, with a variety of busts casting their gazes over the punters below, in particularly displeased fashion in the case of Queen Victoria. There's a punk theme going on, and the pub seems to claim a connection with the Sex Pistols of which various references can be spotted, though the internet unearths no particular tie we can find.

There are just a trio of ales on hand pump (it's a Greene King pub), and a few chilled keg taps that include Punk IPA. A well thought-through wine list fills a board above the bar, though that seemed of little interest to the man dipping in glass bowls for crisps and seemingly leaving full packets beside confused strangers lining up for drinks. We never did find out if he worked for the pub, the crisp company or was just some random oddball.

The food menu is impressive, and of course environmentally laudable. Additional unique aspects include a Trench Map of the Great War just inside the gents, a nod to the Imperial War Museum around the corner, no doubt, and Chaplin's Corner, a little nook at the side of the pub in memory of Charlie, who spent a number of formative years in Kennington.