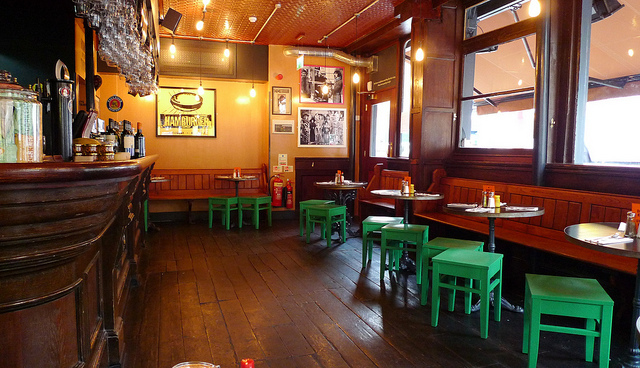 Part of the mini-chain of Draft House pubs that have sprung up to capitalise on the craft beer boom, the Charlotte branch — recently renamed as the Queen Charlotte — sits on the former site of the Northumberland Arms in Fitzrovia.

As you would expect, it's very focused on the ale — here you may try the produce of many, many breweries. There's a massive list of draft and keg beers to sample, and the price of each is cleverly set by its alcohol content: stronger = dearer. We opted for a smooth Swedish offering called Näcken, apparently named after a sea monster known for devouring sailors, followed by a smokey Welsh stout from Tiny Rebel brewery called Dirty Stopout. Superb.

During our visit a youthful, mostly male crowd were devouring not only bizarre-sounding beverages but also what the pub itself describes as 'foot-long pork scratchings'. Other food comes mostly in the form of burgers, which the chain promotes with curious 'Yolk Smoke Poke' ads dotted about. Whereas some pubs settle for ketchup, the Draft House opts for tables laden with mustard and Tabasco.

The pub itself is made of much wood, though the bright spring green stools make an interesting contrast with the otherwise plain interior. There's a smattering of artwork, including what seems from a short-sighted distance to be Frank Zappa in a machine gun nest. It should be noted also that the staff are exceptionally friendly, and will work the room offering table service if the bar is quiet enough.