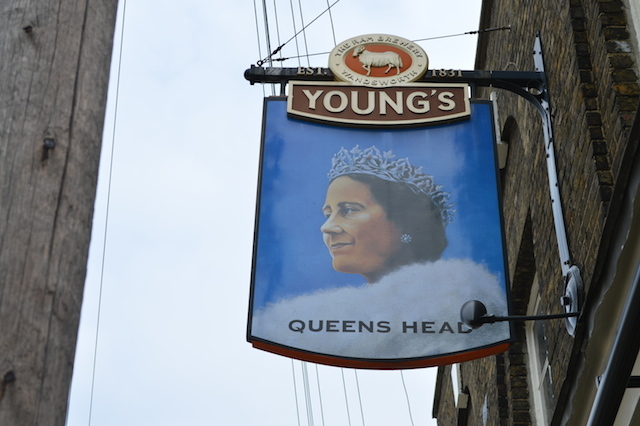 The Queen's Head is, in many ways, unremarkable. It's owned by Young's, with a limited range of that brewer's ales, and attracts a crowd who all know one another. In essence, it's a typical, friendly locals' pub the like of which can be found the length and breadth of the country. It's listed here because of its peculiar claim to fame. In July 1987 the Queen Mother paid a visit and poured herself a pint, declaring it better than champagne. The famous photograph now hangs in many pubs, but it all happened right here. This cultural event of unrivalled importance is remembered in the hanging sign of the pub, and also in the framed letter pinned to the bar.

Otherwise, the Queen's Head is no bad place for a pint, either in the buzzing front bar, the extensive rear room or the small beer garden, concealed behind an unmarked door at the rear-left of the pub. Look out, too, for regular comedy nights.

In March 2016, the Queen's Head stood in for the Widow's Son — a pub which, for decades, had placed a hot-cross bun in its rafters every Easter, but had finally fallen foul of developers. The Queen's Head is threatened with similar attentions. Find out more on the Spitalfields Life blog, and here's a more recent photo history.