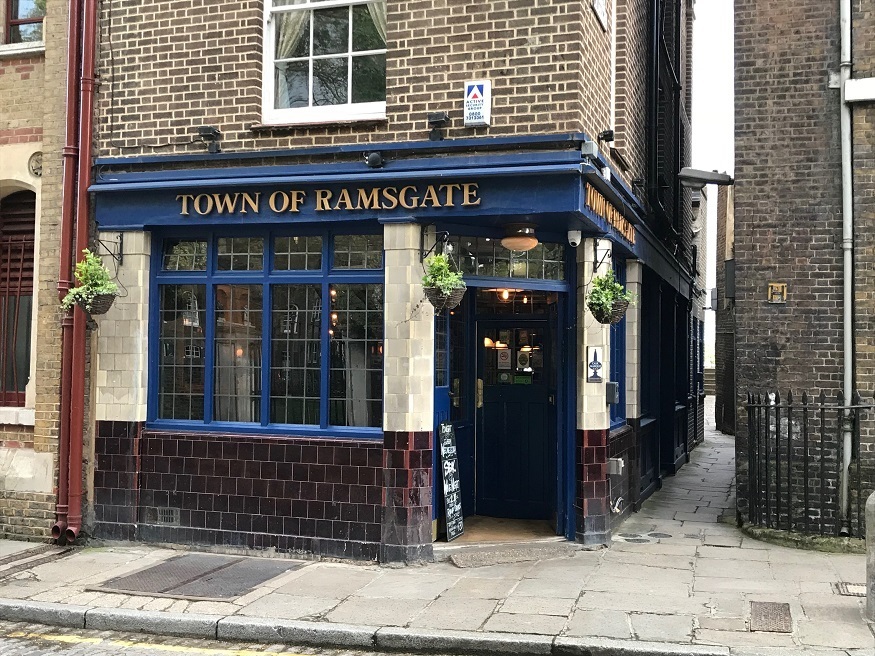 Like the nearby Prospect of Whitby, the Town of Ramsgate claims to be the oldest pub on the Thames (1545, possibly the 1460s). We'll let them fight it out, and instead sit back and enjoy beer from both. The Ramsgate has a geographic advantage over its rival — it's closer to the Tower and St Katharine Docks, so is the first Wapping pub that Thames Path walkers discover when leaving the central area. It never seems to be quite so busy, however, attracting more of a local crowd than passing trade.

The name comes from the Ramsgate fishermen, who'd land their catch at Wapping Stairs rather than continue upriver to Billingsgate, where they'd be subject to river taxes. During the Second World War, the pub had a famous cat named Jerry, who would drink milk from a beaker by scooping it up with his paw. The trick earned the moggie £50, which was donated to the Red Cross. The cat lived until at least 1951, when he was thought to be 21 years old.

But what of it today? The wood panelled interior looks every inch the classic riverside pub, and the long, narrow bar gives a shipshape atmosphere. A small terrace out back offers restricted but welcome Thames views.

The beer choice is limited to widespread numbers like Doom Bar and Pride, but it's well kept. Food is about as traditional as it gets, with prawn cocktail, whitebait, ham, eggs and chips, bangers & mash, scampi,... there's even spotted dick for pudding, a delicacy we've not seen since the school canteen.