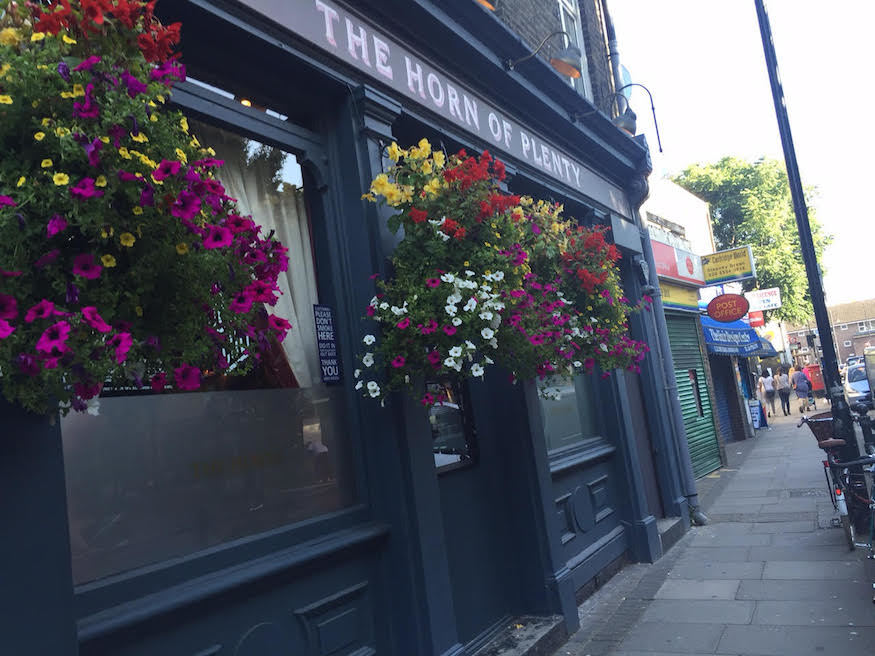 In Greek mythology, the Horn of Plenty (also known as the Cornucopia) is a symbol of harvest — overflowing with fruits, honey and grain. Unfortunately, this stretch of Mile End Road at Stepney Green isn't as bounteously-laden with good pubs, so the recent re-opening of this little boozer is something to be celebrated.

It's been given a makeover including an explosion of colourful hanging baskets outside, and a completely redecorated interior, with maps, a jukebox and a 'Joanna' (which is locked, and only opened for people who have talent — being able to play Chopsticks doesn't count).

There's a relaxed and friendly, buzzy vibe inside — on our visit there was a mixed crowd of mid-20s, families and older couples. This makes for a homely, community atmosphere and the Horn of Plenty feels like a good local — whether you're a local or not.

Food served in the week is a selection of bar snacks, subs from Sub Cult, burger or fish and chips; while on Sundays it's all about the roasts. We tried the beef, which came perfectly pink, with a huge Yorkshire pudding, crispy roasties, mixed veg and nose-tingling horseradish. And lots of gravy. Save space for the rhubarb posset — one of the best desserts we've ever had in a pub.

Quiz night is Tuesday from 8pm, Rock, Paper, Scissors on Fridays from 6pm-7pm.