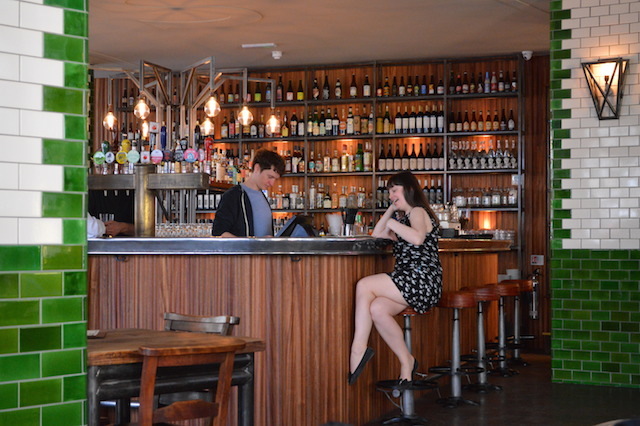 Few will mourn the No 1 Sports Bar, which closed on this site back in 2015. An unsophisticated lager and Sky Sports hangout was never going to thrive on the fringes of Shoreditch. What happened next was the opening of a very different beast in the shape of the Singer Tavern.

The Singer is a sleek affair, with green-and-white tiled walls, minimalist decor and a too-flash-for-its-own-good website. Refugees looking for their old sports bar will be lucky to get a Fosters or Carling here.

As with other venues in the Barworks chain, exotic kegs and draughts are the order of the day. Sometimes this can mis-fire. We took a punt at some chamomile-infused concoction. It was wretched. A swift sidestep onto the Arbor Artisan and we were overjoyed to be drinking here. Even more impressive than the ale selection is the menu of Amaros and Fernets. Even the most foodie people in our group had to google these Italian herbal liqueurs. One day we might even try them.

There's a good vibe about the place, with large benches catering for groups of office mates. The tiling reminds us of a tube station, or swimming baths, or some other rescued early-20th century premises. It's all masquerade as the fittings were only installed for this new opening, but the decor is certainly appropriate given the grand Edwardian facade of No 1 City Road.

If the beer gets tiresome (or the tile-reflected noise levels get unbearable), head downstairs to the 5cc bar, part of an increasingly familiar (but still excellent) cocktail chain. The martini menu is extensive, if variable in quality.