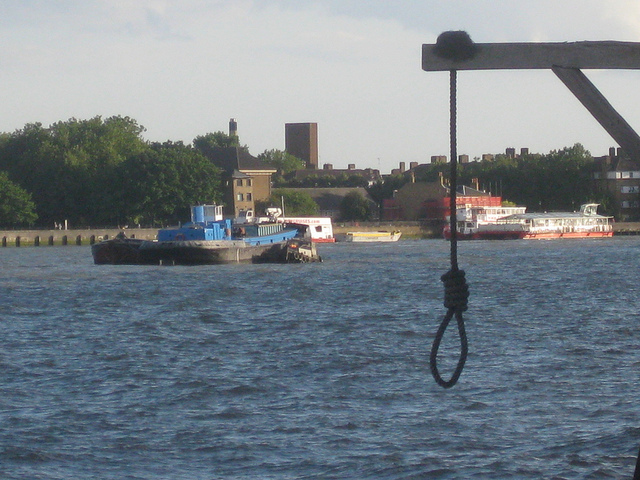 One of London's most famous pubs, and supposedly our city's oldest riverside inn. With a pedigree stretching back to 1520, it was already getting on a bit when Shakespeare first came to town. You'll fall in love with the pewter-topped bar and creaky wooden interior, all rebuilt following a fire in Victorian times and a further refit in the 1950s, though some of the flagstones are reckoned to be centuries old. The drinking terrace out back is one of the most sought-after spots on a warm summer's day, and an upstairs room adds extra, oft-needed capacity.

Previously answering to the name of The Pelican and later The Devil's Tavern, the current appellation comes from a collier vessel that was once moored round the back. Previous satisfied drinkers include Princess Margaret, JMW Turner, Samuel Pepys and, inevitably, Charles Dickens.

The pub plays into the area's history of piracy, with a much-photographed noose dangling round the back. The Prospect was itself the target of plunderers in 1953 when staff and patrons were forced to the floor by armed robbers, who subsequently made off with valuables and the pub's takings. The four malefactors were sent to jail, rather than the traditional punishment of hanging over the Thames for three tides. A guidebook of the time describes the bric-a-brac hanging from the walls: "everything from an aquarium to assegais, pin-ups to pistols, clogs, Chianti bottles, copper kettles, skulls, old furniture and a sense of decay".

Now a Greene King pub, the Prospect of Whitby today is often busy, attracting tourists and Londoners alike. Food and drink options are adequate if nothing special. It's all about location and decor with this place.