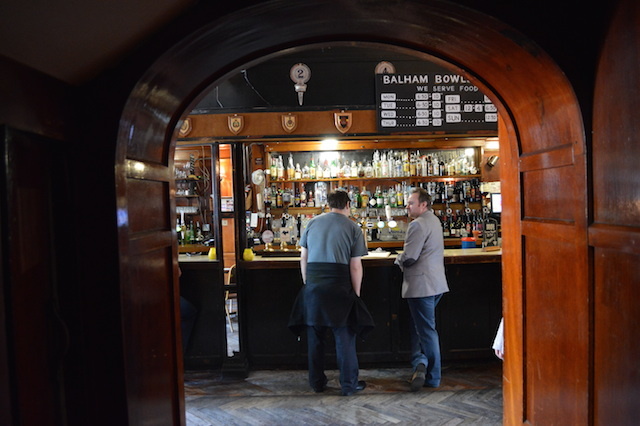 Affectionally known, and cheekily logo'd, as the BBC, Balham Bowls Club is one of the most original pubs around. It was one of the first venues to get the Antic Pubs treatment: requisition a tired old building of character and turn it into something special. In this case, a long abandoned bowling club is transformed into one of the capital's greatest pubs.

It's hard not to use the word 'sprawling' when describing the BBC. On entering, a series of bar areas can be found to the left, a function room known as the Presidential Room sits to the right, and through the back lies a vast dining hall. The poor cleaner has his or her work cut out, for there's yet another capacious space known as The Ballroom upstairs — used for private hire (including weddings) and film screenings. There's even a beer garden should you need to stretch your legs out even further.

No shortage of patrons colonise this space. Turning up at 12.30pm for Sunday lunch, we were lucky to get a table. It would be easy to assume that the BBC, with its ironic subverting of a traditional community space, might be populated with trendy young things, but this isn't so. We've rarely seen such a mix of ages in one pub, with family groups and reunions squeezing in among the dining couples and elderly gents. The Sunday roast, by the way, was superb. Lord alone knows why the two yoga-chatting ladies on the next table chose to leave their Yorkshire puddings, for these were divine.

The front bar has a reasonable selection of beers. We opted for a Blue Moon wheat beer from the US, which comes with a slice of orange — at first distressing to this seasoned ale sipper, but something of a revelation.

Back to all Pubs Back to Balham
Click for Comments