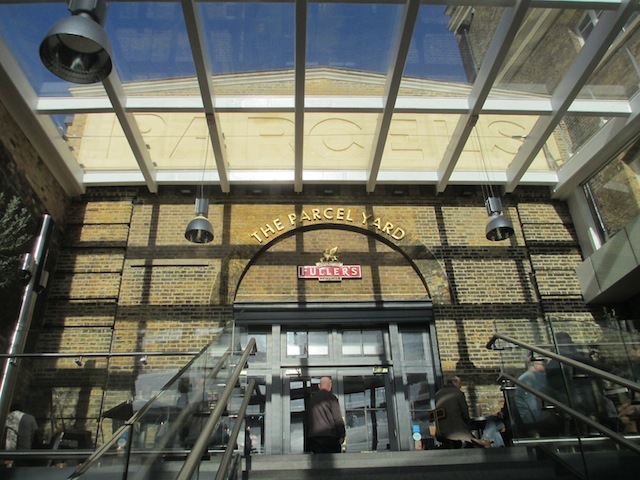 We've editorially chosen this pub for inclusion because we like it.

Station pubs are all shit. That, to a close approximation, was an unassailable fact until a few years ago. Then came the Mad Bishop and Bear at Paddington, the Betjeman Arms at St Pancras, and the real-ale haven of the Euston Tap.

King's Cross had some catching up to do. Nobody remembers its previous station pub — the Duke of York — because it was almost studiously unmemorable. But the treasure that opened above the new concourse in 2012 is more than just a place to grab a drink while you wait for that signal problem to clear. The Parcel Yard is a destination in its own right.

Built into the station's Victorian office spaces, the pub sprawls over two floors, offering views of the striking new concourse as well as the main platforms. We've visited numerous times, and have never sat in the same room twice. Head either upstairs or to the back room for smart dining spaces, or hang out in the conservatory area for a convivial drink. A handful of tables lurk out front, so you can keep an eye on the departures board and/or the unfeasibly long queue for the Harry Potter photo pose.

This is a Fuller's pub, so the beer selection holds few surprises — although they do stock a fuller Fuller's range than most such places. The food is reasonably priced given the popular location. We enjoyed a mighty, meaty plate of liver for just £12, and full-on Sunday roasts aren't much more expensive. It also recently one an unusual licence for a pub — the right to host wedding ceremonies, with space for up to 80 people in the side rooms.

Enjoy it now before they cotton on to the idea of selling butterbeer to the legions of Harry Potter fans on the doorstep.

Back to all Pubs Back to King's Cross
Click for Comments