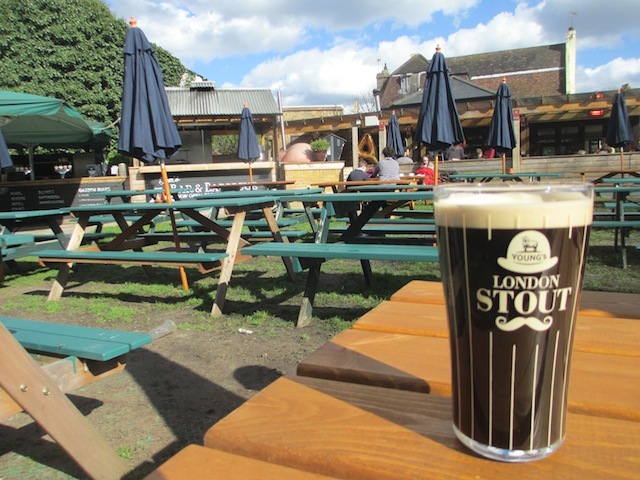 This pub was chosen editorially for inclusion, as we think it's rather good.

One of the oldest pubs in the area, the Leather Bottle has been dispensing ale for over 300 years. It was here, on the slopes of the River Wandle, that the annual 'Mayor of Garrat' — a kind of village idiot award — was celebrated in the 18th century. You have to slog down the long and winding road that is Garratt Lane, but it's worth the hike.

The Leather Bottle is a winner both inside and out. Within, small rooms offer up snug drinking space with three real fires. A conservatory extension provides plenty of room for diners. The beer selection is largely limited to Young's ales, which is a pity given that the excellent By The Horns small brewery is just round the corner.

And then there's the garden. If this isn't the largest pub garden in London, then we don't know what is. The pub reckons it caters for 450 people. There were plenty of free tables when we showed up on a warm spring day. As well as a veritable acre of picnic tables, you'll also find a row of Swiss chalets — a lovely way to crank more usage from the beer garden in colder weather. The space also contains a BBQ area and outdoor toilets for those who don't want to squeeze through the bar. Oh, and that dog sniffing around. He's called Tom.