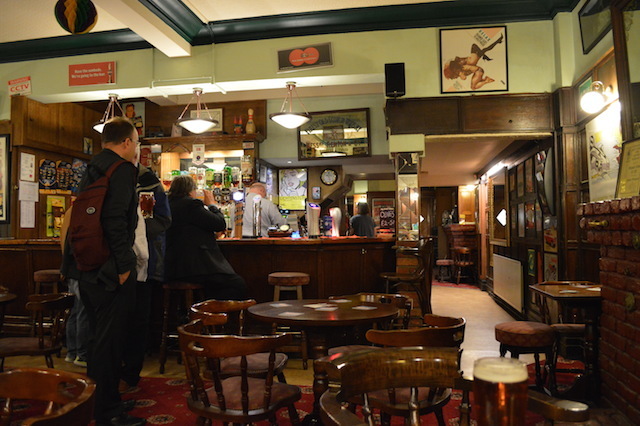 Controversy reigned in our Victoria Park reader poll. The Eleanor had no nominations whatsoever until the second day of voting... and then they flooded in. A little bit of hustling from the venue carried the day and the Eleanor was declared winner. That said, it separately made it to fifth place in a later poll of Mile End and Bow pubs, despite being a bit of a trek from the centre of either. Obviously, it's a good pub.

We entered the place not really knowing what to expect. The Eleanor clearly has plenty of fans, but it does look a little, well, plain from the outside. We needn't have worried. The bar was easily the most convivial, welcoming and atmospheric that we'd visited on the pub crawl (although, we have to admit, this was the fifth stop, so judgments might have been a little clouded).

It's a Shepherd Neame pub, which usually means you can expect well-kept beer and a homely feel. Here, the ale is kept so well that the pub scooped the 2014 SPBW Greater London Pub Of The Year Award. Enjoy your pint in the traditional front bar, over a game of pool, or in the small beer garden round the back.

As one voter summed up the place:

Over the last few years this pub has steadily attracted people who want to drink sociably in a friendly environment...serves an excellent pint, winning real ale awards. This place is an asset to the community and is now in the jazz circuit attracting artists...provides a great party venue without the need for locals to travel so, those who dismiss it, do get to know this pub and you will see why it's popular.

We can only agree. A more recent visit, on a Friday night, included a DJ playing rare and classic tracks from the 50s, which as any clever person knows, was the best era for music in the history of the planet. Be sure to give this place a try next time you're in the area. A true local gem with no pretensions but plenty of smiles.

Quiz night is the first Thursday of each month.