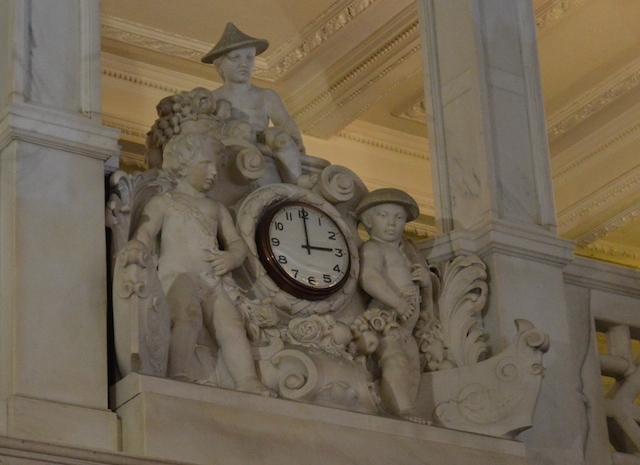 This pub was chosen editorially for inclusion by Londonist.

Marbled columns, coffered ceilings a Victorian baroque facade and a drinking space large enough to house a whole fleet of Routemasters, the Crosse Keys is a leviathan of a pub. Based in an old banking hall, this is the JD Wetherspoon chain at its biggest and best. City of London pubs are always busy, so this place's great attraction is the sheer number of tables available. The clientele are a mite more diverse than the typical City boozer, too — suits are by no means a majority.

Like any Wetherspoon pub, you can expect a dazzling array of draught beers. They had a special tie-in with Windsor & Eton brewery on one visit — the TreeTops stout was delicious. Next time, we tried the oddly named Radgie Gadgie and the superior Bermondsey Best. Food is the chain's standard fare, with the popular steak and curry clubs attracting many. Despite the cheap prices, this is good wholesome stuff from a kitchen with a five-star health certificate.

If the noisy drinking hall is a bit too boisterous for you, head to the balcony seating at the back of the bar, where you'll find intimate nooks from which to watch the masses below. Alternatively, head across the road to The Swan, a tiny Fuller's pub (some say it's the smallest in the Square Mile) that couldn't be more different from the Crosse Keys.

There's history on this site, too. The Crosse Keys was opened on the site of an ancient coaching inn of the same name. During construction of the banking house in 1851, a girder gave way causing a portion of wall to collapse. Five workers were killed. Next time you're here, raise a toast to their memory.