London's West End Lights Up With Theatre Magic This Christmas

This is a sponsored article on behalf of Heart of London Business Alliance. 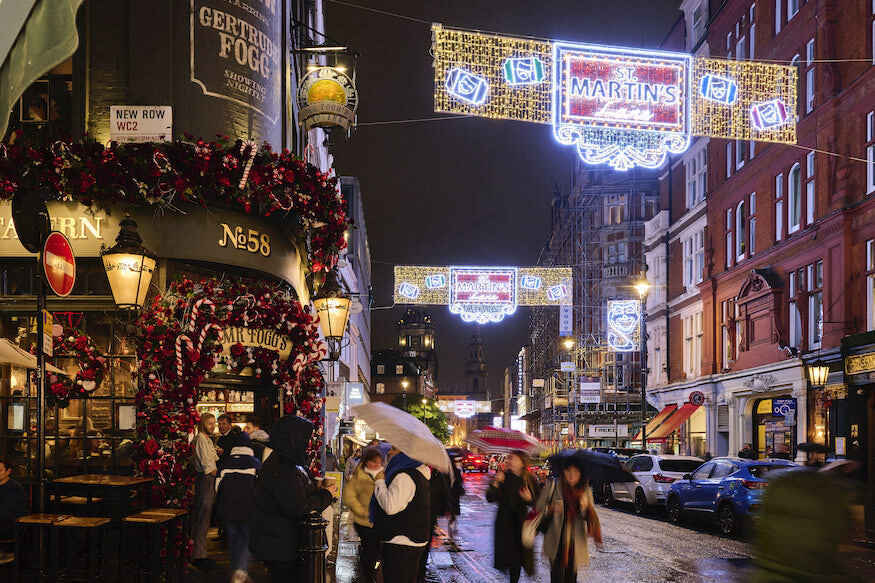 St Martin’s Lane, nestled in the heart of London's famous theatre district, has been given the twinkle treatment for the first time ever. Home to glittering Christmas lights, star-studded shows and your fair share of festive tipples, the street dazzles after dark. Hold onto your Santa hats! There's all this to look forward to...

Festooned in eight million Christmas lights, St Martin's Lane enjoys a serious glow up from 3.30pm-11pm every day. The display's in place until January, making it the perfect spot to snap your seasonal selfies. Even better, it's made entirely of energy-efficient LED lightbulbs and 100% recyclable coloured inserts. Conscientious and Christmassy — what's not to love?

It may be the first time St Martin's Lane has been given a festive makeover, but it's far from just a photo opportunity. After all, this is the home of London's legendary West End. The Christmas lights herald a season of top notch theatrical offerings all along the street. Speaking of which...

For the romantics among you, English National Opera’s hotly-anticipated adaptation of It's A Wonderful Life brims with Christmas spirit. The production, based on Frank Capra's beloved 1946 film, enjoys a limited run until 10 December at the London Coliseum. Be quick if you want tickets — festivities this feel-good don't hang around for long.

At Duke of York's Theatre until 11 December, Oliver Award-winner Juliet Stevenson leads a stellar ensemble cast in The Doctor, following its sold out run at Almeida Theatre. If you prefer pantomime dames to piercing dramas, wave hello to Sir Ian McKellen, John Bishop and Mel Giedroyc in Mother Goose. The family-friendly panto picks up at Duke of York's Theatre from 15 December.

No night out on St Martin's Lane is complete without a pre-theatre tipple or two. Victorian-styled cocktail parlour, Mr Fogg's Tavern is your go-to for eccentric decor and a gingerbread-and-apple-infused Boxing Day Punch. Meanwhile at The Alchemist, dive into a range of gastronomic cocktails including the Mulled Bellini and a decadent White Chocolate Raspberry Martini. Look, it's Christmas. You deserve this.

Need something a little more substantial first? The five-star St Martin's Lane Hotel serves up chic pre-theatre menus and festive meals throughout Christmas and New Year. Don't be fooled by the hotel's innocent looking tea counter either. Hidden behind is Blind Spot Bar, a luxury speakeasy specialising in knockout cocktails. What finer way to toast your five-star night out in London's West End!