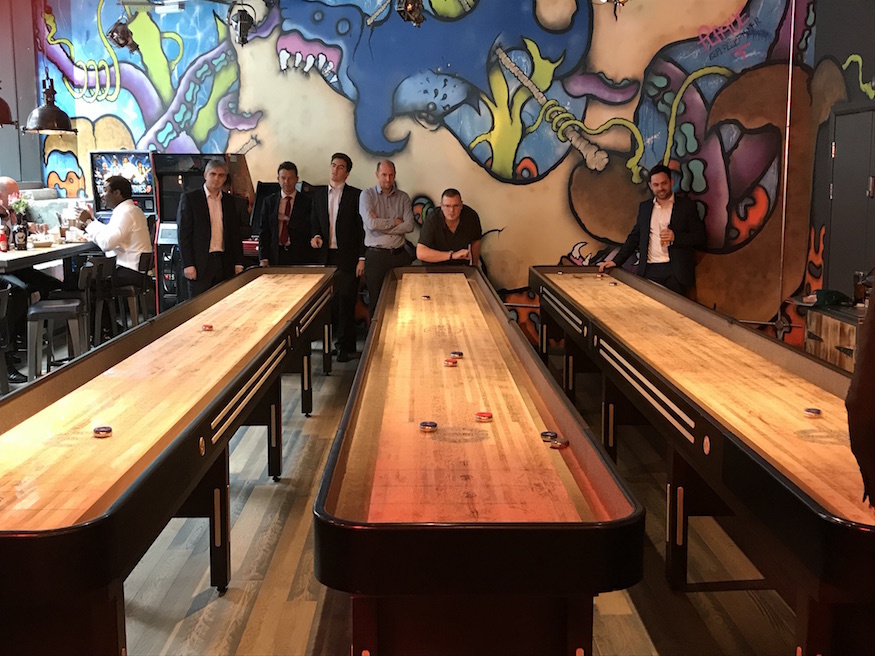 The streets near the Tower aren't exactly short of plus-size pubs, what with the giant Wetherspoon and the pedant-bating Hung, Drawn and Quartered. But now an absolute battleship of a pub has muscled in on the scene. In many ways, it completely blows the competition out of the water.

BrewDog Tower Hill takes up the full length of a block. It's so fricking long that the far end seems to disappear round the curvature of the Earth. So many benches and stools fill the space that you could probably seat the entire residential population of the Square Mile and still have room for guests*.

*Not quite. The bar can accommodate 500 people and the population of the Square Mile is about 9,000. But still, not many pubs can fit an 18th of the population inside.

So it's big, but is it any good? Yes. Any BrewDog pub gets an automatic place in our 'best pubs' database thanks to the generous range of beers. At Tower Hill, they've outdone themselves. 28 different craft ale taps ensure that no human being could drink their way though the entire suite and live to tell the increasingly incoherent tale.

Our only gripe is the cost. BrewDogs are never a cheap night out, but here the prices are hard to justify. We're talking £5 to £6 a pint for the weaker stuff. One 3.6% beer weighs in at £4.10 for a half. And don't get us started on the food. Good job the City's streets are lined with gold.

The bar differs from other branches by having its own brewery on site, currently producing west coast IPA. The tanks are impossible to miss. They're brought front-centre of house rather than hidden away in a back room. Add on the BottleDog shop for takeaways and this is an unmissable destination for beer lovers.

It doesn't stop there. The far end of the pub includes three mighty shuffleboards and a bank of arcade machines — all surrounded by the kind of street art we assumed had gone out of fashion, but now we're not so sure.

In summary, this place is a contender for London's biggest pub, with the biggest range of ales, and — if the prices weren't so alarmingly high — quite possibly the best pub.