Afternoon Tea Week: A Guide To The Best In London

By Helen Graves Last edited 50 months ago
Helen Graves Afternoon Tea Week: A Guide To The Best In London 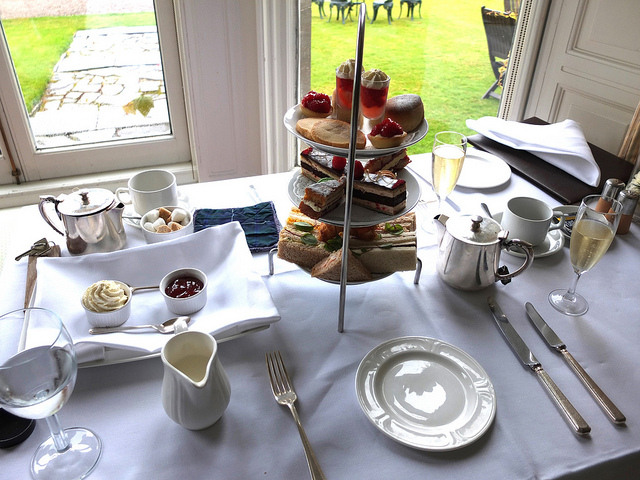 The tradition of taking tea, sandwiches and mini cakes was introduced by the 7th Duchess of Bedford, who got bored of the 4 o’clock slump and decided to do something about it. The practice spread, grew more and more elaborate, and by Edwardian times it was a full-on gowns and fine china job. Nowadays we see teas from the very traditional to the themed, but what makes a good one and where can you get it? Let's get the criteria down first.

The flavours of the sandwiches should be something along the lines of:

After that, it’s up to the individual. A few points to bear in mind, however. Firstly, there should be no dipping of knives into chutney jars. Sweet fruit chutney (the kind you find at food markets between the painted plates and olives) is disgusting, but nobody else seems to have noticed. Also, salad leaves should be used with caution, because it’s difficult to make them dainty and the texture isn’t right for a finger sandwich. If watercress is involved, it needs to be chopped so it doesn’t come out in one long piece, pulling half the filling with it, before slapping against your chin. All or almost all of the fillings should be British, and a generous amount of seasoning is important.

These should always be included and served warm, with strawberry or raspberry jam and clotted cream. The cream should never, ever be whipped. This does happen occasionally and it should be a sackable offence.

There is of course, the question of whether to apply cream first (Devon) or jam (Cornwall). Snore.

Tricky area, this, as there’s so much room for variation, but here goes.

Can we do away with these? Yes, they add some height above the other cakes and, as they’re often filled with some sort of fruit jelly, they have the effect of lightening the whole tea but, honestly, they're just a bit tacky. Also, the spoon never fits right to the bottom of the glass, which is just frustrating.

If you know what you’re doing, this should be proper, loose leaf tea. There are astonishing loose leaf teas available nowadays, and because they’re not cooped up in a bag, the leaves have room to unfurl. You can get a few brews from a fat pinch, with different subtleties of flavour each time. It’s called afternoon tea, so the tea bit is very important.

This is the only place that any biscuity-ness should be happening, so you want something that’s spent time on its lees (bits of yeast and whatnot leftover from fermentation). Something like Roederer non vintage should do nicely.

Join author and journalist Rosie Millard for afternoon tea as she discusses her new book, The Square, a comic romp featuring the bored, over-privileged and vain London bourgeoisie. The hotel will be serving its new Summer in the City Afternoon Tea menu, including thirst quenching iced tea, scones infused with the summer flavours of coconut and pineapple, jelly ‘cocktails’ and mojito macaroons.

Afternoon Tea Bus Tour, starts at either 8 Northumberland Avenue, WC2N 5BY or Belvedere Road by the London Eye, £45 per person

Experience Afternoon Tea with a difference on the BB Routemaster bus. This vintage London double decker bus will drive round central London, taking in some of the city's best sights, while you can indulge in the fabulous BB Afternoon Tea. The menu includes tasty sandwiches and delicious cakes, pastries and macarons.

This isn’t cheap, but it is very special. The original London supper club host Kerstin Rodgers, aka Ms Marmite Lover, hosts an 18th century inspired afternoon tea to fit with the luxurious, breathtaking surroundings in one of the capital’s most fascinating time capsules. Georgian dress encouraged!

2015 marks the 125th anniversary of celebrated crime writer Agatha Christie's birth. Kicking off in Afternoon Tea Week, Brown’s will be commemorating her life and love of literature in The English Tea Room, serving a special Agatha Christie afternoon tea featuring a selection of delicacies mentioned in her books and inspired by her most famous character, Miss Marple.

To find more teas around London, visit www.afternoontea.co.uk. This afternoon tea article is an amended version of an article first published on Food Stories.