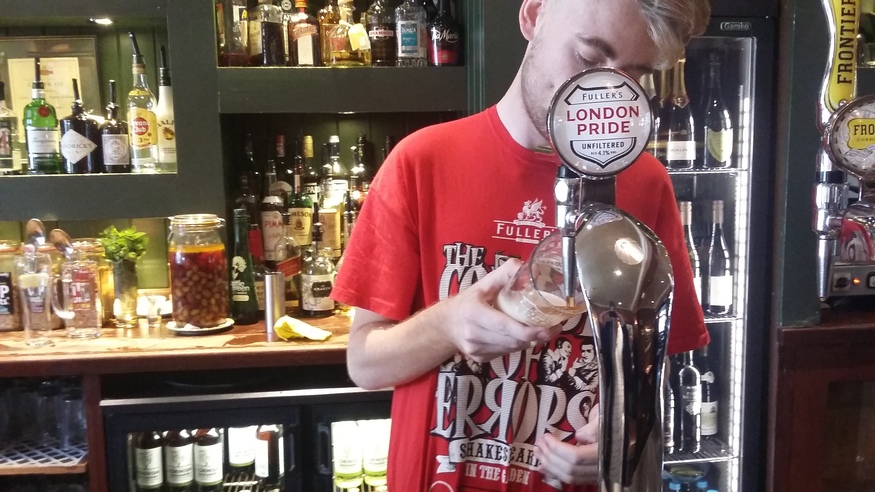 The Red Lion's exterior is conspicuously grey and concretey — a kind of boozer-meets-pillbox.

The whole ensemble is guarded by four bright red lions, two of whom have lost an eye in the cause of duty.

Fortunately, this belies a rich, rather beguiling interior, which at once conjures up a stately brown Victorian/Edwardian pub, and bright and breezy gastropub. The kind of decor that works all year-round.

The pub attracts an odd mix of locals, sporty folk from one of the many nearby pitches, and homeward-bound visitors from the London Wetland Centre. Even Jimi Hendrix found his way to the Red Lion, supposedly writing Purple Haze here. All will find a welcoming venue.

As with many pubs in these parts, the Red Lion is owned by Fuller's — which does somewhat limit the beer choice. The Unfiltered London Pride is about as exciting as it gets on tap — or fork out a premium for one of the craft beers in the fridge.

(In the meantime we'll continue to pester Fuller's at every beer festival we attend — telling them the great beers they sell there should be in their pubs too.)

We didn't try the food, but the likes of potted duck on toast, cider braised pork belly, and Vintage Ale sticky toffee pudding bodes well. Look out for the old menu on the wall, taunting you with the days you could get a steak for one shilling:

In the summer months, the garden's popular with drinkers, dogs and rampant children — although we still managed to find a seat on a clement Saturday afternoon.

About a minute's walk from Barnes' major attraction — the London Wetland Centre — this pub is a lovely little spot for lunch before or after. And judging by the adverts dotted about, it's a destination in its own right for a fix of upmarket theatre: