The Gruffalo Is The Perfect Intro To Theatre For Kids 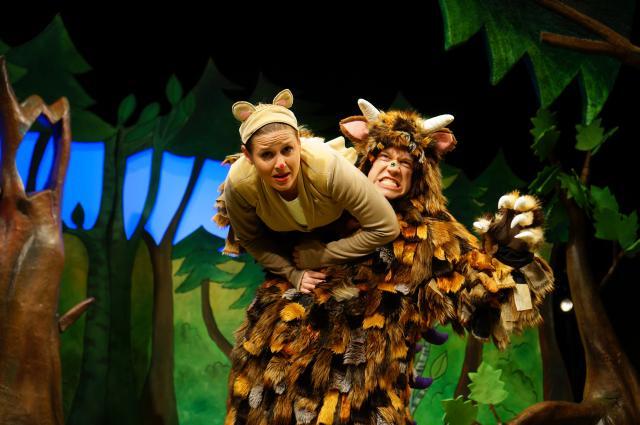 West End theatre may not be an obvious summer activity for toddlers, but this summer several are opening their doors earlier in the day to offer entertainment for very young children. On the day we visited, Soho was sweltering and the cavernous theatre provided a welcome escape from the heat. The Gruffalo audience were mainly very excited preschoolers, and the question on everyone’s lips as the lights went down was: “when is the mouse going to come out?”.

You may be wondering how Julia Donaldson’s 700 word classic could possibly be stretched into a 55 minute musical. But the tale of how a small creature outwits its predators is as strong as ever. The show keeps the original poem and adds extra dialogue, songs and comic sequences in a delightfully leafy set that resembles Axel Scheffler’s original illustrations.

If you're concerned your children might not be able to sit quietly, don't worry. The audience is encouraged to chair-dance, sing and roar like a gruffalo, with parents enthusiastically joining in. The cast of three keep the pre-schoolers and their grown-ups enthralled with polished and energetic routines borrowed from 1970s kids TV.

Owen Guerin is a cuddly, sensitive and somewhat misunderstood gruffalo who, if circumstances had been different, would have rightly been accepted as the life and soul of the party. Timothy Richey slips seamlessly between the roles of three predators: fox, owl and snake, with costumes and dance routines getting more extravagant as time goes on.

This Gruffalo originally opened in 2001, just two years after the book was first published, and has been performed all over the world. The theatre company behind it, Tall Stories, specialises in adapting children’s stories for the theatre. It makes a great first theatre experience with a familiar story, larger than life performers and a charming woodland setting.