The Circus At The End Of The World 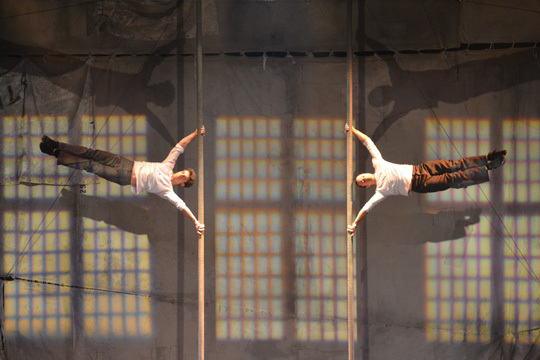 Quebec has become a reliable source of superior human circuses — recently we've especially enjoyed its lumberjacks, not to mention the all-conquering Cirque du Soleil. Add to that The 7 Fingers, another terrific troupe which arrives in Holborn’s Peacock Theatre for a brief summer sojourn before it bounces off again on its world tour.

The collective has been going for 10 years and now has several touring shows in motion: this one is called Traces and is choreographed by founding members Shana Caroll and Gypsy Snider. It offers a distinctively nonchalant take on the art of tumbling and twirling.

That Gallic insouciance, however, is a bit odd considering the over-arching theme of the show is the end of the world — apparently. The six performers don't bother too much with the loose narrative and it’s down to the programme to explain the smoke, strobes and alarms that sporadically interrupt the stunts: "Traces takes place in a make-shift shelter, an unknown catastrophe waiting outside the doors of tarp and gaffer tape. In the face of an impending disaster they have determined that creation is the only available antidote to destruction." Well, we didn’t really get any of that. It actually looks a bit more like a detention in a school gym. Less duck and cover than buck and hover.

The feats are as impressive as you’d expect, whether the performers are running up poles like squirrels, vaulting through perilously high metal hoops or launching each other into the air on a giant see-saw. There are several moments where you'll do a double-take and wonder just what the heck happened there exactly.

Besides the circus skills, and much more so that the ominous storyline, it’s the relaxed matey atmosphere that makes this show stand out. It seems that if we're all about to die, we might as well die with a smile: the 7 Fingers are extremely uplifting company.

Traces is on at Sadler's Wells Peacock Theatre in Holborn until 12 July. Tickets £15-£38. Londonist saw this show on a complimentary ticket.