You Me Bum Bum Train. Either you don’t know them, or you barely know them. Secrecy is a key component of keeping the Bum Bum Train on track, but what we do know is that they are a not-for-profit company who put on interactive, site-specific shows around London with the help of a not-so-small army of volunteers.

Audience members enter one at a time and encounter a series of random, and often bizarre, scenarios in which they become the centrepiece. In the past, audience members have been outnumbered by cast 200:1. And, perhaps most amazingly, over the last 15 years the details around shows they have put on have mostly been kept shtum. People don’t seem to Bum Bum and tell.

Tickets to their upcoming autumn show (which, predictably, we know hardly anything about) go on sale at 6.30pm tonight. Don’t expect many to be left by 6.31pm. We spoke with founders Kate Bond and Morgan Lloyd about the unique model, their reliance on volunteers, and what keeps people coming back to ride the train.

Famously, over 80,000 tried to buy tickets in less than a minute to one of your past shows. Why does YMBBT capture peoples' imagination?

Morgan: If you have something amazing happen to you, you tell people about it and I think that’s what’s happened. Even though only a few people get to experience it, the legend of it lives on through people.

Kate: And the concept of it is accessible to everyone. There’s no confusion about what it is, whereas with some art forms it can be ambiguous and people are left scratching their chins. No one comes out thinking what was that about?

You call visitors to the show ‘passengers’, why is that?

M: I guess it’s because it’s a quicker way of saying audience member! It’s not like a normal audience, it’s somebody who’s participating, moving through from scene to scene. So from a stage management point of view they’re the only person who’s transitioning for the entire thing.

In YMBBT, the public encounter ‘scenarios’ — where do you find the inspiration for these?

M: You get inspiration from everyday life. We’ve constantly been inspired by different situations and how absurd real life situations can be. And how social awkwardness and pressures have all got their own inspiration. A lot of them are based on real-life experiences, so they kind of develop over a long period of time. It’s that, plus the inspiration of the building.

Have you ever discussed and subsequently discounted a scenario? If so, why?

K: Good question! They’re usually discounted because we don’t agree on them. One of us might be interested in a particular situation and the other one just doesn't get it. We generally don’t find doing something that might be offensive interesting, so we don't choose to be controversial for the sake of it. I think the subtle sides of life are more interesting.

M: To us, horror rides or anything sexual or smutty are a bit of a cheap trick. A lot of people do suggest scenes which involve that kind of content but it doesn’t really interest us. The main thing is “is it feasible?”. That’s the real challenge for us.

What has been your favourite scene from past YMBBT shows?

M: It’s funny you should say that. Not so much a scene, but since doing YMBBT I’ve taken on more things in life that I wouldn’t normally have done. We’re asking passengers to push outside of their comfort zone in a way that will be rewarding for them, so since doing that I’ve thrown myself into things I wouldn’t usually have done.

K: People have spoken about YMBBT in terms of therapy, which is nice in a way. It’s more valuable when it has a personal effect. One guy said he had years and years of therapy but this experience made him release more of his subconscious than any therapy he had ever done. But we can’t ever really imagine that because we’re on the other side.

M: One audience member in his 50s, when he came out of the experience and came into the bar he admitted finally to his wife and family that he was gay! Apparently everyone was just really relieved because obviously they all loved him and wanted him to be living his truth. But that was one of the most full-on therapeutic results from a passenger.

What are the primary hurdles in creating this kind of show?

M: The big number one is venue. That’s really, really difficult to get. We’re seen as a good thing and even then it took us a long time. This is why there’s been such a wait for our next show. I know that Punchdrunk and Secret Cinema are all having a similar kind of problem. And that’s kind of weird because in London we’re globally leading in immersive theatre and other places like America — particularly New York — see us as the forerunners of theatre. 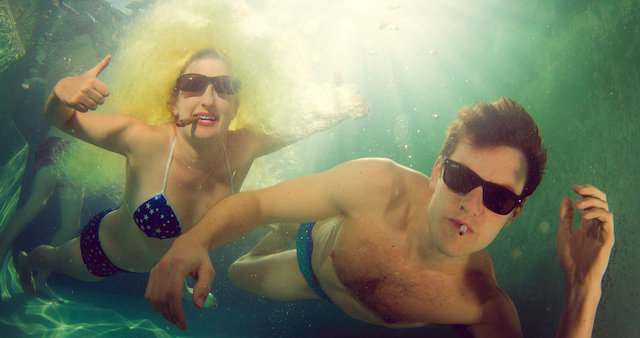 Your upcoming show was originally supposed to start in March 2015. What caused you to reschedule?

M: Unfortunately the venue fell through, through no fault of anybody. So we were on the back foot having to look for a new space. Fortunately we’ve found one and we’re really excited because we think it’s just as good, if not better!

Did you ever think “this is the end of the show for us"?

M: Absolutely, it was nearly the death of us. Fortunately we had a lot of help from our supporters, but it was almost bankruptcy territory for us.

K: We’re a not for profit and rely on a small arts grant (compared to the budget needed to produce the show), so to find a venue that will give us the space for at least six months, but also a venue that volunteers can travel to is so important.

You’re quite unique in using members of the public rather than trained actors in your shows. Why is that?

M: As a not for profit company, our whole project has never been financially motivated. Last year we were offered an opportunity in Las Vegas to make it commercial and it meant that we would have made money out of it, but it wasn't inspiring to us.

K: The perspective of a volunteer is quite interesting. Because people are volunteering they’re opting in out of choice, rather than just being there for their wage, and you can really feel that when you’re making each show happen. It’s their project as much as it is ours. Also, if it were to break even, not to be commercially viable but just to break even, each ticket would cost £1,600! So just from a mathematical perspective, our format can’t lend itself to even a breaking even model let alone a commercial model.

What makes a good volunteer? What sorts of people are you looking for?

M: If people have availability and can take on responsibility, that’s great. But to be honest it’s anybody who has a function and can fit in. So if you want to be involved just as a tea maker you’re still such a valuable person. There are brilliant opportunities for people looking either for production experience or wanting to get into creative industries. We have a scheme with Create London where people who are job seekers with creative interests are coming in and getting work experience with us. We’re also having one of the world’s leading lighting technicians coming in to train people who wanted to get trained as a theatre technician in lighting. So there’s all these great things that happen naturally in the project.

How do you respond to the criticisms levied around using unpaid volunteers to make the show work?

M: I think a lot of people get upset and criticise the volunteer element because we’re using them as performers. Whereas really that’s the tiny bit, making it happen and building it and the production side is the biggest part. But it is annoying and it usually comes from a place of ignorance. We don’t target actors. When people do get involved and they see how things really work they love it. We get asked to do more and more shows because people want it back and want to be a part of it. The whole thing is volunteering, people know that before they come, they don’t have to do it. It is a little bit upsetting when you’re just trying so hard and it’s for such a good cause.

What is the ultimate compliment for you?

K: Just if it’s meant something to a passenger on a personal level. There was one painfully shy guy who came out of our 2011 show who said he had been dreading it and didn’t want to go through with it. But he decided to go for it and he made great public speeches in these scenes with big crowds and he just couldn’t believe it. He managed to get over that personal hurdle and you just think wow, if a moment on YMBBT has done that to somebody then that’s more than enough of a reason to keep going.

Why is secrecy so important to what you do?

K: When people are aware of the content of the experience in any way, even if it’s a minor detail, they start preparing how they’re going to react to it. It’s something we’ve learnt over the years because we weren’t so secretive in the early days and then people would come to the show and act through the scenes. When they don’t know about those scenarios and they’re suddenly in the moment, they just react to it and have as close to a real-life experience as possible.

What can you tell us about your upcoming show?

M: The thing I always say is that everybody should try and get a ticket. We’ve limited tickets to two per household address and told people not to research anything into the show. If people do know about our show or have been before, we recommend you give your ticket to someone else who is really good at telling stories so you can live it through them! It is really special when people do it for the first time.

The next You Me Bum Bum Train show is scheduled to take place in September-October 2015. Tickets go on sale at 6.30pm on 21 June and can be booked online here (if you’re quick)! YMBBT are still looking for volunteers, if you’re interested in finding out more sign up to their volunteer scheme here.