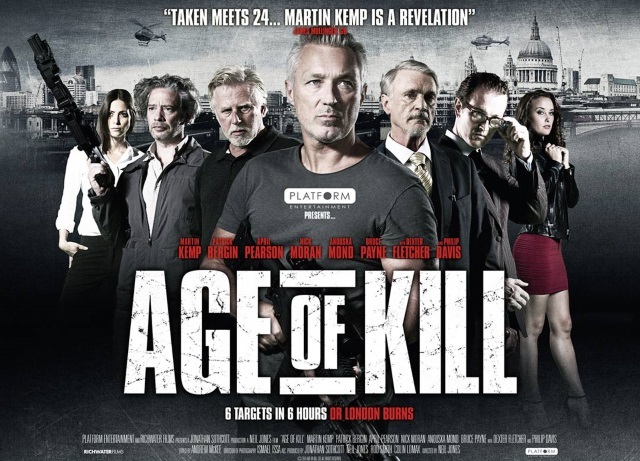 Londonist is not a film review website. We firmly believe there are plenty of those around and you're more than capable of deciding which dinosaur-based shite you want to stare goggle-eyed at for a remarkable two hours and 16 minutes.

But occasionally a movie with a heavy London focus will slip through the net and straight onto the straining shelves of the local Sue Ryder, and we feel it's our duty to alert our readers to it. You may have seen posters for this film around the tube lately; it's how we came to be aware of it, with its cast staring grimly into the middle distance holding huge automatic weapons, with London's famous skyline in the background. '6 TARGETS IN 6 HOURS OR LONDON BURNS'. Oh yes, we're having that.

In the case of Age of Kill, it pretends to be London-heavy in order to look cool, and because we had to watch it, someone has to share our suffering.

To summarise what passes for a plot in this atrocity, a secret government operation goes tits up in Spain and a crack team is disbanded as a result. Six months later a member of this team, Sam Blake, played with his usual gloomy disbelief by Martin Kemp, starts to receive calls telling him he has to kill six people in six hours or it'll be doom for various innocents, Blake's daughter included. She's clearly a lot more important to Blake than the randoms he now starts picking off around town with bombs, rifles and pained expressions.

At this point, a slight spoiler alert, though if you don't work it out yourself 15 minutes into the movie you really should stick to Saturday night TV. The villain is Phil Davis, an actor who we will allow no criticism of — this review gets its only star through his presence. He plays Blake's boss in the original undercover team and he's gone a bit mental. You can tell he's the villain because, even though his voice is distorted in these calls and he wears a mask, you can very clearly tell the voice is that of Phil Davis, in not the last of this film's incomprehensible production decisions. He looks livid throughout, presumably at having been talked into this disaster.


One of the six actors named across the top of the film poster is Bruce Payne. He plays the Prime Minister and is on screen for 90 seconds. Neither of the primary female characters is named on the poster, but perhaps in the case of Anouska Mond that's no bad thing. Mond plays the most wooden on-screen member of the police since PC McGarry. Her lines are a risible concoction of goading male superiors into sexism based on her model-like appearance, comforting an emasculated male colleague who's shat at a particularly nasty crime scene and basically proving herself to be London's most capable detective without demonstrating a single skill suggesting she would even have been let off the tube at Hendon. Mond's last role was in the regrettable Danny Dyer vehicle Assassin. It's all about finding your level.

Eventually our hero finds himself jogging leisurely across fields, expression unchanged, taking down helicopters with handguns and proving the local plod's batons are more of a danger to themselves than the crooks. Blake teams up with another character being forced into tasks she'd rather avoid, to save her uncle. There's a barely explained side-plot involving an NF-style anti-Islam group led by Nick Moran — the Patriot Alliance. At one point Moran's Roy Dixon extols his followers to chant the following: "Integrate or go!" Oh aye, top of the far right's agenda, integration.

Characters use words like 'dumpster' and 'SUV', hinting at the enormous Hollywood budget they failed to obtain - baffling given the high-quality script. Someone shouts "I want Sam Blake taken off the grid" as though this is a Bourne movie. This is not a Bourne movie. The PM's cameo epitomises the heinous nature of the dialogue throughout: "Do you know why I ran for office? To make a difference." Do you know why we watched this film? Neither do we.

London plays a very minor role in all of this. A text flashes up on screen to tell Blake his first victim is in Homerton, but that device is abandoned and while we get to see a few unidentified housing estates, pubs and kebab shops, and Battersea Power Station, that's basically your lot. Do you know why we watched this film? Exactly.

There's not even any Craig Fairbrass in it, though there is some Dexter Fletcher, pulling an expression that suggests he's highly amused to be getting paid for this. And Blake's daughter is played by Dani Dyer, ushering in a new generation of oh please God no more of this.

The nerve-straining cheek of it all is that they set things up for a sequel, which just cannot be allowed to happen. Do not whatever you do pay for this film, because it feels as though the very future of the British film industry hinges on audiences refusing to swallow any more of this unspeakable filth. And if it seems unnecessarily harsh to criticise people just trying to earn a crust, consider the bin man who empties 'dumpsters' all over the pavement then points out that at least your bin's empty. Some people are not born to be bin men.

Age of Kill is available on DVD now. It didn't get a cinema release. Funny that.