Why Is London Rubbish At Recycling? 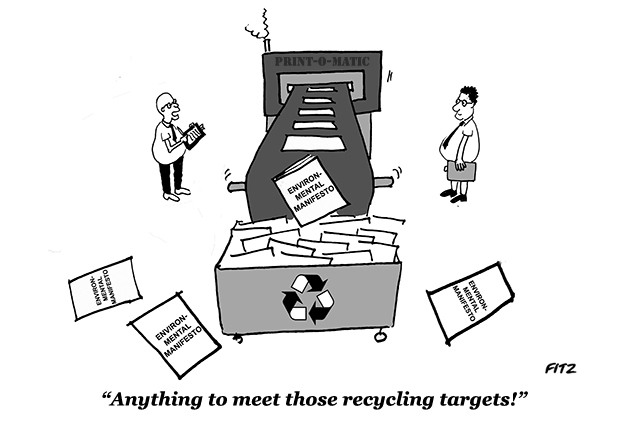 So far, the 2015 General Election campaign has been mostly unbothered by such trivialities as the environmental health of our planet. Even the Green Party has been accused of downplaying the issue of climate change.

Remember how rubbish Londoners are at composting food? If our city’s waste disposal problems may be likened to the 10-tonne fatberg recently removed from a sewer in Chelsea, then food composting is only the tip of that fatberg.

Defra stats show that only 33.9% of household waste in London went for recycling last year: a fractional (but still depressing) decrease on the previous year, when we reached the dizzying heights of 34%.

A league table based on the figures puts nine London boroughs in the nation’s 20 worst-performing local authorities by recycling rate, with Newham bottom of the pile on 17.7%. The council told us that relative deprivation in the borough is one of many “barriers to recycling”, with small, high-density properties giving residents fewer opportunities to store recyclables.

2015 is the year by which Boris Johnson wanted a 45% recycling rate for London — which would have merely brought the capital in line with the national average. That his target was trashed by some 500,000 tonnes casts doubt over the ability of the UK more widely to meet the EU-set goal of 50% by 2020.

“There’s a lack of political will,” argues Baroness Jenny Jones, a Green member of the London Assembly. She claims that with little guidance as to how to meet their targets, councils have entered contracts which, perversely, incentivise incineration. “Now, they have to produce waste just to fulfil their requirements — while recycling has taken a backseat.”

A spokesperson for the Mayor said that although it does not have direct responsibility for collecting waste, City Hall is concerned by the levelling off of recycling rates, and continues to invest heavily to meet its “ambitious targets”.

“London could and should do more,” says Antony Buchan of the London Waste & Recycling Board (LWARB) — a panel appointed by the Mayor and London’s councils. LWARB ran an an efficiencies programme for London’s local authorities, providing financial and consultancy support to boroughs who were looking to make savings.  “London is a diverse city and waste and recycling is only one of the many services that boroughs have responsibility for,” Antony explains. “Austerity has meant competing priorities for the budget available.”

London’s recycling levels vary wildly, from Newham’s low performance to the comparative eco-heaven of Bexley — which is in England’s premier league on 55.2%. The reason for the discrepancy, explains Ben Johnson of waste management firm SUEZ Environment, is what he calls the ‘DNA’ of the boroughs. It’s a social measure with a broad range to it.

“Housing density alone is not to blame,” he explains. “London boroughs have not changed dramatically in that respect for a few years.

“What’s missing is the ability to communicate to communities which have varying levels of transience and multilingualism,” he continues. Each of the 33 boroughs has a highly individual “challenge” in its DNA; there can be no “one-size-fits-all” policy. Equally, a small set of common approaches — based on a grouping of boroughs — is far better than 33 different ones.

The experts agree — as they have done for some time — that getting the word out more proactively to Londoners, without boring or confusing them, is what’s needed. But perhaps the strategy needs to be yet stronger. Peter Dickson, a commercial director of Biffa, reckons there isn’t enough to steer Londoners away from the trash can and towards the recycling basket.

“The financial difference between recycling and refuse just isn’t large enough,” he says. “And it’s not local authorities who can influence this — it’s national or EU policymakers. So far, landfill tax has had by far the greatest impact on increasing recycling rates here.”

But at some point, doesn’t the public have to take some responsibility for its rubbish habits? When politics turns ineffectual, maybe our hope rests in those dreamers of more creative solutions, who want to get human psychology on their side.

To make this whole business of reducing, reusing and recycling much easier, the founder of London rubbish clearing company Junkwize Alex Maccioni suggests bus lane access for any driver on recycling duty, and mandatory recycling chutes for all new multiple-occupancy buildings. There are simple lessons to be learned from the continent, he reckons.

“How about plastic bottle bins in the tube, next to Oyster top-up stations?” he asks.

“You’d find them in Germany. So why not here?”

Featured image by Simon Kimber from the Londonist Flickr pool.