Vote Londonist: A Manifesto For A Stranger City 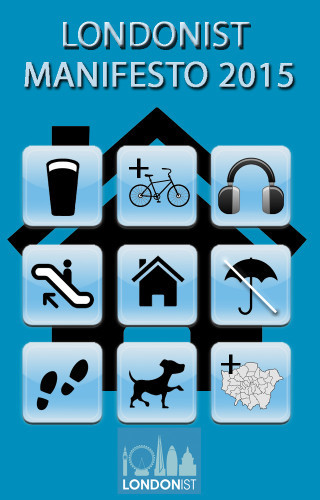 Perhaps it’s not such an outlandish idea. But if we ever asked you, our readers, to put an X by Londonist in a polling booth, it’s probably only fair if we give you a little advance warning of what type of government we’d form, and what entirely sensible rules everyone will have to follow on pain of dismemberment once we’re elected in the inevitable landslide.

We present to you the Londonist election manifesto 'for a safer, cleaner, stranger city for us all'. Yeah it's long, but if you don't read it all you can't then moan when we come and take your stuff.

The four words above have become a catchphrase for Londonist in the last few years, in the face of an astounding inability of politicians to effect meaningful improvement in the housing sector. There's an indisputable housing crisis; short of redistributing everyone who's living in bigger houses than they need, we need to build more bloody houses. But not just any houses — they need to be houses that people can genuinely afford, at a range of tenures (private sale, shared ownership, private rental etc).

To do this, we're either going to need to build up or out (onto green belt), which will mean overhauling planning permissions and overcoming public opposition. We'll provide more central government funding, since the current model of funding via private developers means an oversupply of overpriced luxury apartments to offset the costs of stupidly high land prices, which either get bought by investors and left empty, or rented out which does nothing to release the pressure on supply of housing to buy and overall house prices.

We will also impose more regulation on landlords to ensure decent standards of housing, and rent controls in the interim while we build enough bloody houses to calm the market down.


There are certain parts of England on the outskirts of London that would benefit hugely from being a fully paid-up borough of the capital. Various former parts of Middlesex were left behind in 1965, and we believe it’s now time to welcome the likes of Staines and Potters Bar back into the fold, plus Watford, Epsom and others.

We will also arrange a consultation on whether to create the London Borough of Elstree and Borehamwood. It clearly believes it’s next in line, probably because Eastenders is filmed there, but a consultation is required to hear objections from the rest of London because, well, it’s Borehamwood isn’t it? Sorry Elstree, but... Borehamwood.

Compulsory safety tests for all cyclists

We are disinclined to shy away from controversy in our manifesto; for every furious cyclist that hammers us for this commitment there will be a motorist who cheers and claims victory. No sugar-coating: the cost of compulsory testing will be shouldered by cyclists, with the money used to fund improvements to cycling infrastructure and extra bikes for hire. Any cyclists who refuse to participate will have stabilisers welded to their B’Twin Mach 740.

Compulsory safety tests for all HGV and bus drivers

That will teach you to only read one part of a manifesto before heading in rage to the comments. The war between drivers and cyclists on our streets is a stain on the good name of London and it’s about time all sides came together to accept that a bit more consideration of each other might lead to a few more people making it home without broken limbs or worse each day.

On public transport far too many people ask a dog how it is and where it's going and how its day has been and so on, without so much as a glance at the human owner. It’s bizarre. Even if it's just a quick hello, it will become mandatory to acknowledge that the dog didn’t get there all by itself. Nor did the human come to that.

Our blustering blond chum has singularly failed to end rough sleeping in London as he claimed he would. We will do so. A 5p surcharge on every cup of coffee in the city will pay for more shelters, and an improvement across the board in the services each shelter can offer to provide a long-term solution to each homeless person’s circumstances. Why coffee? If you can afford how much a coffee costs in that fancy coffee place, you can afford to chip in for those less fortunate, that’s why.

We’ll also use some of the money generated by an empty property levy to help the homeless. The levy can be avoided by opening empty buildings to allow homeless people to stay in them, funnily enough.

It’s important that people get to where they need to be in this city, but no-one would suggest banning orders on the thousands of bored-looking French high school children on every pavement as a sustainable solution. We will therefore impose a lane system on all pavements across the capital, with a sensible system of overtaking and specific ‘parking’ spots where people can stand and gawp at the wonderful sights of London without getting in everyone else’s sodding way.

How we manage to make four lanes work on one pavement (two speeds each of both directions) will be opened up to the finest architectural minds in the capital, the type of people who regularly put in for things like building dubious garden bridges across the Thames. And if carnage ensues on our walkways, we can always use cycle lanes as extra pedestrian overspill lanes oh dear God calm down we’re only joking Jesus.

Umbrellas at eye level are the scourge of a fast-moving society, and few places get as fast moving as the City during rush hour. We propose a full ban on all umbrellas within the boundary of the Corporation, and a full ban on all massive umbrellas that have no place in a metropolis within zone 1.

For all the reasons we feel this ban is fully justified read our guide to umbrella etiquette. And anyway, at least 30% of London’s ageing banking class are bald anyway, and surely they can just wipe their domes.

No gossiping on the tube

One morning this month, Londonist had to move carriages to get away from two women droning on about something Kelly did at the weekend which was apparently awful ('NO! Shut urp! She never! Shut URP!' + squealing) only to have another pair start in the carriage we moved to.

Also: football bores. No blow-by-blow discussions about the match on Saturday. If you must witter nonsense for the whole journey, it must now be done quietly, or we will begin issuing community service orders like flyers for the gym none of us ever go to.

What in the name of all that’s holy do these people think is going to happen behind them? An escalator or staircase full of people will not somehow magically stop simply because you have decided that your case is far, far too heavy to carry as far as the nearest gap in human traffic to pull the handle up on it. What have you got in there, the last few bricks for Crossrail? Carry the sodding thing to somewhere safe before pissing about with the handle or face a jail term of a length chosen by a jury selected from people directly behind you on the steps.


More trains on the Epping branch of the Central line

More trains on the Epping branch of the Central line.

Provision for recycling newspapers and magazines

All stations, and some trains where it’s feasible, should contain slots just wide enough to fit a free newspaper to reduce the staggering number of free papers that must go straight to landfill every day. Slots would be just wide enough for papers only, though lined with reinforced material on the inside because obviously some people are bastards who want to hurt others. If someone’s so clever they can build a bomb slim enough to fit in a recycling slot but still big enough to cause carnage at a station, they’re probably working at CERN or somewhere rather than trying to blow up a box full of Evening Standards.

This morning, walking along the Embankment, Londonist was briefly confronted by two people walking the other way with headphones so enormous it looked like the Cybermen were invading. It's time the scourge of the giant cans was ended, so we propose a maximum width per headphone of two inches, which should be more than enough for you to listen to your terrible pop atrocities without the rest of us having to put up with it.

We will impose fines on TfL when they say there's a good service on all lines and the board is showing six minutes until the next train during the middle of rush hour. And not just on the Epping branch of the Central line by the way.


A total ban on all pub closures

The number of pubs closing in this city is a disgrace to the fine traditions of this oft-inebriated place. In the last year alone well over a hundred pubs which once claimed Charles Dickens as a patron have shut, probably, because every pub in London claims him as a former client. We propose to introduce an immediate ban on any building currently being operated as a pub from ever operating as anything but a pub for as long as there’s hop and grain available.

Those pubs which fall on hard times will be taken back into public ownership until it can be returned to rude health, because if it can work for train franchises and banks it can bloody well work for boozers too.

We also propose to recover our lost heritage by reclaiming the spaces previously occupied by certain famous taverns in the city, such as the Devil and the Mitre, both on Fleet Street, and the Mermaid Tavern on Bread Street. Ben Jonson supposedly drank in all three, and in his case that’s utterly believable, the fiendish drunkard.

Eating and drinking on public transport

A strange loophole currently exists whereby alcohol is banned on most forms of public transport in London, but seems still to be allowed on trains passing through. Southeastern and Thameslink piss-heads, we’re coming for you.

Meanwhile, a loophole the size of the Wembley Arch exists whereby anyone can eat anything they want on public transport without a single thought to how it reeks. Passive breathing in of dinner is over: no more burgers and fried chicken on the tube under a Londonist government. Kebabs are fine though.

A referendum on London becoming an independent sovereign state, bounded by the M25

Arguably the most controversial of all our policies; it has generated much discussion in Londonist HQ. Some believe it’s time for London to go it alone, while others believe it’s a little harsh of us to leave people in places like Rotherham needing a passport to get out of wherever Rotherham is.

So it’s right that the people decide for themselves. Advantages range from money generated in the city staying in the city instead of subsidising the ungrateful provinces, and an end to those same moaning provinces complaining about being ruled by a liberal London elite. Disadvantages include a lack of certain natural resources and the murderous den of terror London will likely become as a result, the problem of defence against an angry British people hell-bent on revenge, and where we put babies when all the houses are finally full up.

Note: on a successful vote for independence, the M25 may have to be moved inwards a bit to put Borehamwood outside it, depending on the result of the previously announced consultation.