Sshh! Victorian Librarian Ronald Heaton Has Something To Say

By Sponsor Last edited 86 months ago
Sponsor Sshh! Victorian Librarian Ronald Heaton Has Something To Say

This is a sponsored article on behalf of Bishopsgate Institute. 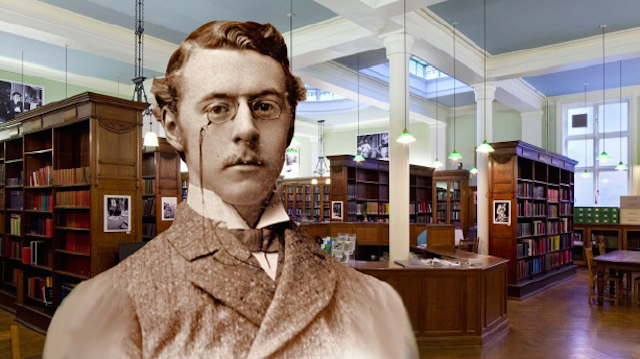 Meet Ronald Heaton. Here he is in the library of the Bishopsgate Institute. This tufty haired historian from the Isle of Man became the first librarian at the Institute when it opened in 1895. Now he’s back, and tweeting the trials and tribulations of the Victorian librarian via @ronaldheaton.

Heaton has plenty to talk about, for Bishopsgate Institute’s library has always been abuzz with the thrill of discovery. Its rich collections hold material chronicling London life, from punchy political handbills, to ephemera such as 20th century event flyers or Victorian advertisements.

Resurrecting a 19th century librarian is just one of the creative ways the Library shares its history and collections with the public. Most of the London courses on the Institute’s adult learning programme make hands on use of the archives. Drawing workshops might study fonts used in the library’s more flamboyant documents. History courses will sift through the photographic collections. The This is London course, aimed at newcomers to the city, uses 19th century tourist guidebooks to bring vanished times back to life. A particularly tasty course, 100 Years of London, in July will see participants poring through the archives to ‘meet’ a range of London characters, from anarchists to public librarians and criminals to peace activists.

Bishopsgate Institute has just announced its tempting programme of summer courses and workshops. Or follow Ronald to get a unique insight into the early years of this cherished public institution.