Pina Bausch Creates A Surreal World Of Dream And Dance 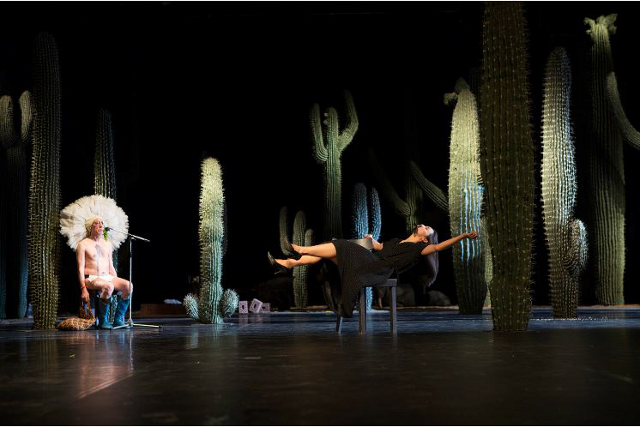 As the sun rises (or decends) over a desert landscape filled with giant cacti, mysterious figures begin to wind their way between the monumental plants: a woman in a black dress and heels pushes a heavy wheelbarrow laden with bricks, from which she starts to build a wall, a man in a pink tie begins to pluck and eat leaves from a head of lettuce, and a woman in a long, flowing evening gown twirls among the cacti, followed by a man in a trenchcoat solemnly carrying a paper-wrapped package to the staccato beats of African tribal drumming. If one looks closely towards the back of the stage, it might be possible to make out something that resembles a walrus. If you've never encountered choreographer Pina Bausch's Tanztheater Wuppertal before, you may be forgiven for wondering what's going on.

Ahnen is a dreamscape, riddled by enigmatic characters and figures and highlighted by incandescent, elemental dance. As the work unfolds, many of the figures and vignettes appear to offer some sort of commentary on life and humanity, but these are left up to the viewer to fathom, and the ultimate result is like being in a surreal dream which only hints at reality. This work is clearly more theatre than dance, but the dance, when it occurs, is mesmerising and performed with precision. Such is the immersive surreality of the work that even when a technical glitch occurs (the safety curtain becoming stuck for 20 minutes, leaving a man carrying a rubber walrus suit stranded in front of the stage), it all seems to be part of the performance.

Many emotional states are expressed, from playful joy to anger and sadness. Clashes between men and women are a common theme, with one particularly dark humorous moment when a man and a women mime mutilating each other, with the actions becoming increasingly more extreme and brutal. Other vignettes seem to comment on the banality of life and work, such as a women with a heart drawn on her face who constantly grates a white substance (soap? chalk?) into powder by candlelight. A woman in a glass aquarium rises from her watery bed to play the piano, and a man wearing a ballet tutu like a tribal headdress sits unmoving and mute before a microphone. Another man forces a dancer to jump through a hoop, only to smash into a wall.

While these inexplicable but mesmerising rituals are being enacted, there is also a feeling that the work could have done with some editing. It's three hours long, and full of avant-garde scenarios, so might not be for everyone. But with bizarre, brutal, yet beautifully staged and flowing choreography, it's worth letting Ahnen sweep you away into a world of dream.