Dodgy Election Leaflets: We've Fixed Those Graphs For You

We all know the phrase 'lies, damn lies and statistics'. In an election it becomes even more appropriate, and none more so than stupid graphs on campaign leaflets. You know the type: 'only X party can win here!' with a very convincing bar chart showing how close two parties are. Then you look at the small print and discover the figures come from a council by-election held in 1987, or something. We've taken some of the most egregious examples uploaded to the marvellous Election Leaflets website, and tried to correct them. You're welcome.

"Only Resham [Kotecha] can beat Labour in Dulwich and West Norwood' screams a Conservative leaflet, uploaded by what appears to be, er, Resham Kotecha. The Liberal Democrats look to be coming in a very poor fourth. 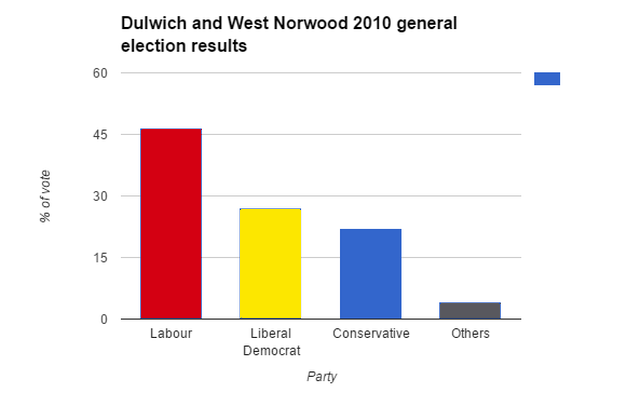 We're not arguing with the figures from Liberal Democrat candidate Jill Fraser, but those bars don't look quite right. It's almost as big a gap between Labour and the Lib Dems (18%) as it is between the Lib Dems and the Tories (8%). 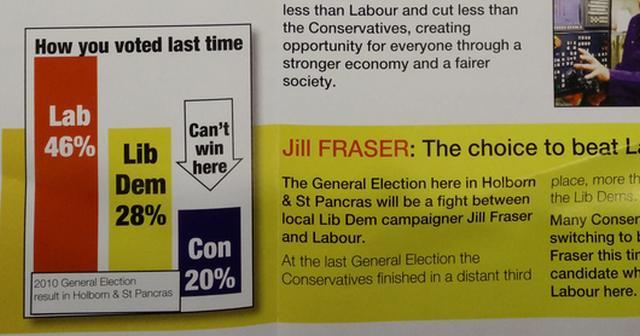 So we've fixed that for you. Much closer. 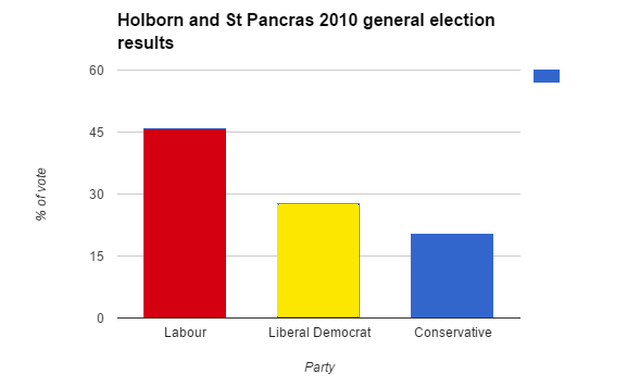 Signs of desperation from the Green Party? Instead of using actual election results, in Richmond Park and Greenwich and Woolwich leaflets are proudly displaying graphs that represent results from website Vote for Policies. We understand the point they're trying to make, that when people are presented with ideas they may make different decisions than when they're presented with parties. 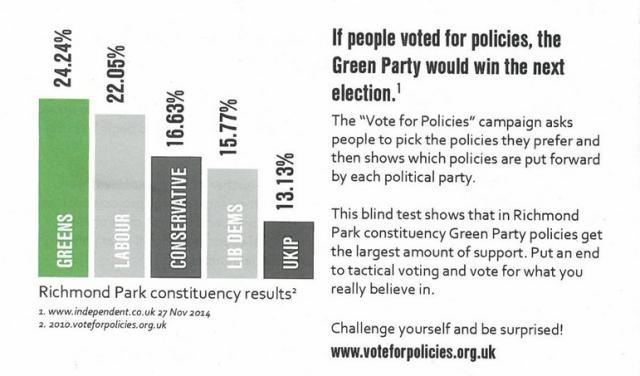 But it neatly forgets that the kind of person likely to do such an online poll outside of a general election period will be a very self-selecting, worthy-minded, middle class type. (Also, more recent results from Vote for Policies show a definite evening out of support, with Labour and the Lib Dems ahead of the Greens in both constituencies.) But for a more accurate picture, let's see how residents actually voted in 2010. 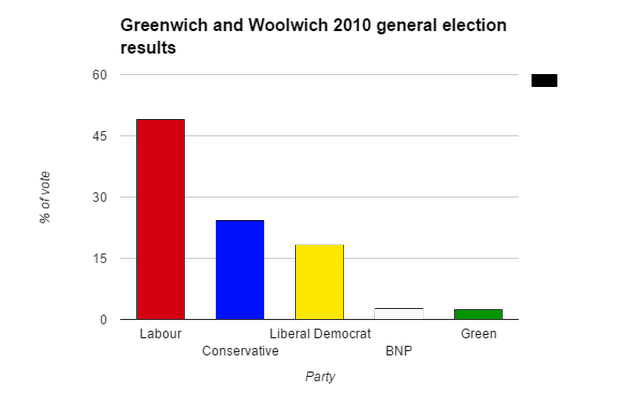 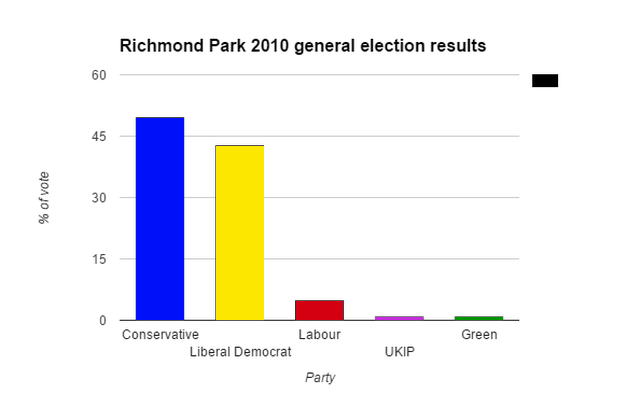 Conservatives in Lewisham East (or East Lewisham, as they insist on saying) reckon they're practically tied with Labour: "local election results and recent opinion polls show that in East Lewisham the parliamentary elections next May will be a straight fight between Ed Miliband's Labour Party and a resurgent local Conservative Party". 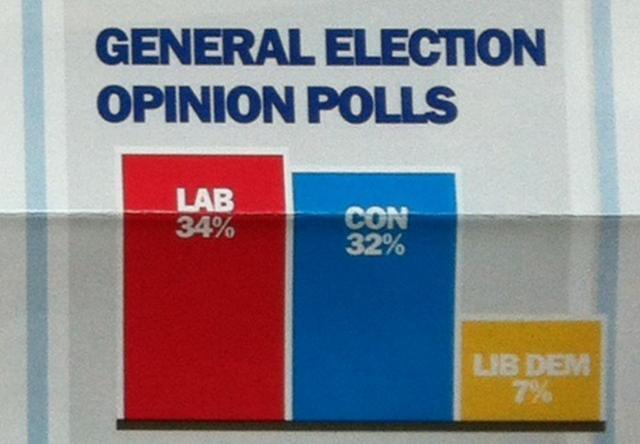 Really? We wonder if they're using national opinion polls to make this chart, because the last general election looked like this: 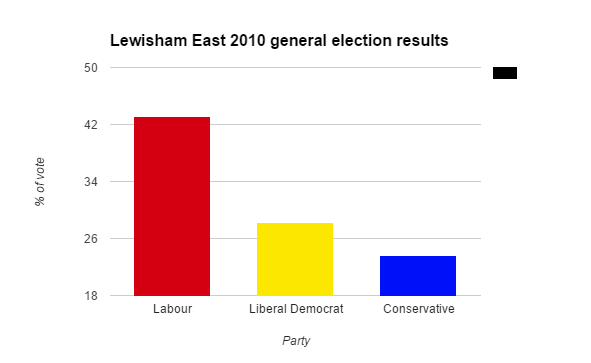 And even using "local election results" it's not much better. This shows the total number of votes received by Labour and the Conservatives in the wards making up Lewisham East during the 2014 council elections. If that's a straight fight, the Tories have a glass jaw. 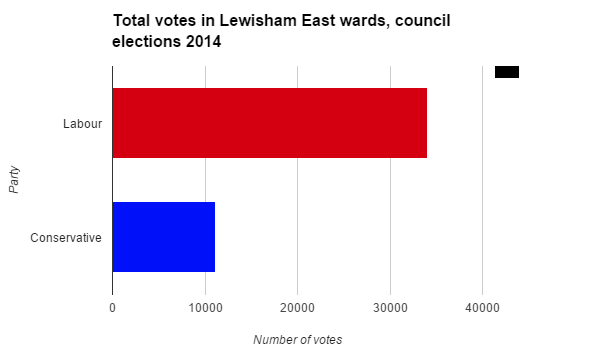 Crikey, it's close in Battersea. There's just 250 votes in it, according to a leaflet from Labour candidate Will Martindale. 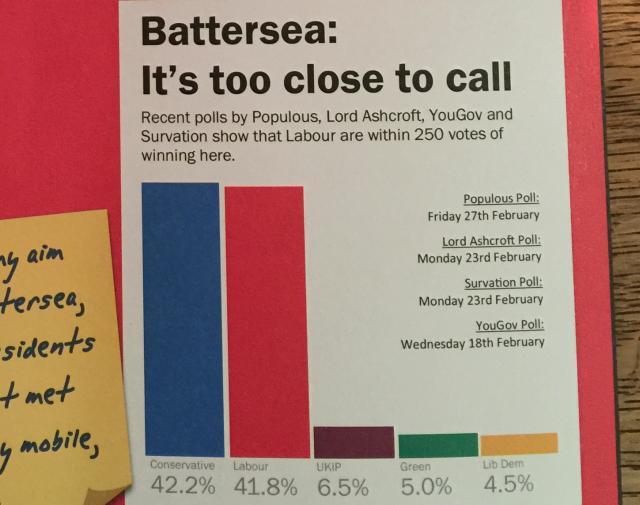 But looking at those polls... Lord Ashcroft hasn't done a constituency poll for Battersea, and as far as we can tell the other polling data cited is national. Is Labour in Battersea doing something similar to the Conservatives in Lewisham East, and using national polling data to make a local battle seem tighter than it is? Because this is what actually happened in 2010: 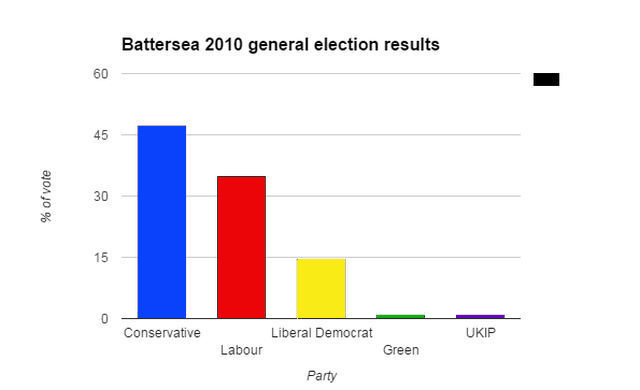 Got a leaflet through your door that looks dodgy? Email a scan or photo to rachel@londonist.com and we'll take a look.