A Tribute To The Runners Of London

As 35,000 competitors weave their way through the capital’s streets on Marathon day, we take a look at the year-round effort London’s running community puts in with this award-winning documentary by Matan Rochlitz and Ivo Gormley.

The Runners is a raw and poetic London Short that brilliantly captures the energy and inner life of the people who get up early to jog through the city’s parks no matter the season, whether the weather is kind or not.

Ironically, the inspiration for the film came when Rochlitz took up swimming as a way of getting his thoughts straight. He told Londonist: "I realised that when I swam, my mind would clear up and I could focus on certain questions I'd have at the time. Sometimes they were big existential questions but often they were very simple things; still what struck me was the clarity of the thoughts. For a moment I started thinking: how can I interview swimmers? Then I shared the idea with my friend Ivo Gormley and together we realised we could translate the concept to runners." 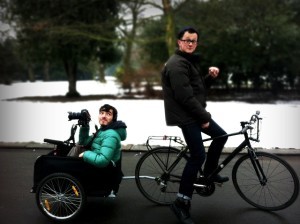 The two then took a bike and a camera out and asked joggers to share their thoughts while in the process of running. "I think there is a number of reasons why people opened up. The movement and rhythm of running can put people in a sort of meditative state; also when your body is ‘busy’ it's hard to bullshit — you don't have the usual body language defence mechanisms, it's harder to lie when you're moving. On our part we tried to look as unthreatening as possible and I think we succeeded. Ivo and I looked quite silly with our bike and bike trailer."

The results are fascinating and transformative: a collection of honest confessions and personal stories of an existential nature that seem effortlessly captured by the filmmakers with moments of rare insight and true human empathy. It’s a terrific documentary that will make you want to get your running shoes on too.

Want to be featured? If you have a London-themed short film that you’d like us to consider for this series, send an email with the subject “London Shorts” to Stu Black and Ioanna Karavela via our email: londonshorts@londonist.com