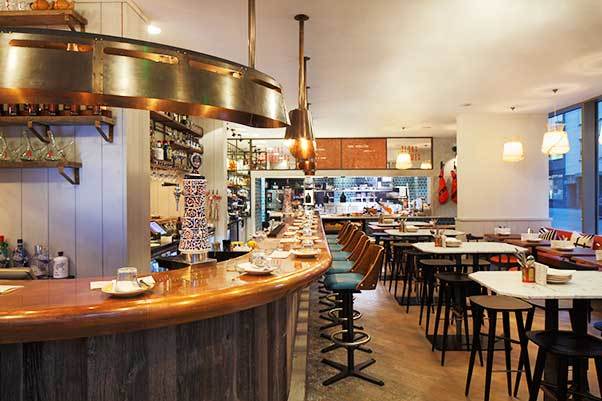 Omar Allibhoy — the Spanish chef behind this new Shoreditch spot — is apparently known as a local equivalent to Jamie Oliver in his native Madrid, and Gordon Ramsay has described him as the “Antonio Banderas of cooking”. Given his aim with this restaurant, maybe Russell Brand would be a better figure for comparison.


You can’t knock his enthusiasm — he speaks of putting tapas ‘on the map’ in the UK, and acting as a ‘crusader for Spanish food’, citing a frustration at the lack of authentic Spanish restaurants over here.

We’re not sure we agree. When the first Brindisa opened at Borough Market ten years ago there might have been a case for such talk. Now that we have Michelin-starred Barrafina, Bermondsey Street’s compact José, Soho’s energetic Ember Yard and — well — any of these top spots on the scene, it’s fair to say that the revolution has already happened.

Still, that doesn’t mean we can’t have more — and if Allibhoy’s rhetoric isn’t watertight, his experience is. After a stint at former ‘best restaurant in the world’ El Bulli near Barcelona, he worked for Ramsay at Maze in Mayfair and went on to head up Notting Hill’s El Pirata De Tapas, which sloped into decline and eventually shut only after he had left.

Enter Tapas Revolution, a brand that launched in 2011 with a glorified kiosk on a busy Westfield concourse and followed up with an outlet in Bluewater shopping centre. Having enjoyed his cooking at the former and not visited the latter due to its location, we reckon this first stand-alone site is long overdue.

Its design is a slick and grown-up one, dismissing the bullfighting memorabilia and other tapas kitsch that often comes with the genre in favour of bright white walls, turquoise leather stools and a shiny bronzed bar. Its sanded-back wood panelling is a token nod to the rusticity we like to think of when tapas is involved.


The food here is actually anything but rustic — it’s better than that. It’s carefully constructed, cleverly presented and at times quite inventive. But like good Spanish cooking should it feels untamed, natural and sun-soaked. It also comes at prices which encourage light-hearted ordering and — give or take a few numbers and an exchange rate — aren’t too far removed from holiday eats in Barcelona.

Thick slabs of pan con tomate (£2.95) benefit from a gutsy dose of garlic; truffled mushroom croquetas (£5.50) are successfully gooey and luxuriously rich; and 18-months cured serrano ham (£3.95) is particularly deeply flavoured for its price — finer varieties available for up to £10.95 a plate should you want to treat yourself.


A Chorizo (£5.50) served whole has been cooked in Asturian cider, making it soft to the point that it’s almost spreadable; it’s at once spicy, sweet and tangy. A stand-out comes in the form of boquerones — delicate, marinated anchovies (£2.50) — which are prettily served in a sardine tin, layered with garlic, parsley and pickled chillies.

It’s not all spot on: lamb skewers (£6.95) are underseasoned; the patatas bravas (£3.75) need more spice; and the prawns in our gambas al ajillo (£7.25) are near tasteless — though the sauce is punchy and delicious. They’re relatively small details which we’re sure can be ironed out.

Our Spanish waitress is infectiously friendly and our house red — available by the 500ml ‘porrón’ for £12 — is dangerously gluggable; and continually topped-up bread is a warm touch.

There is nothing about this new restaurant that’s revolutionary, but revolution can wait until mañana; viva la highly affordable tapas.