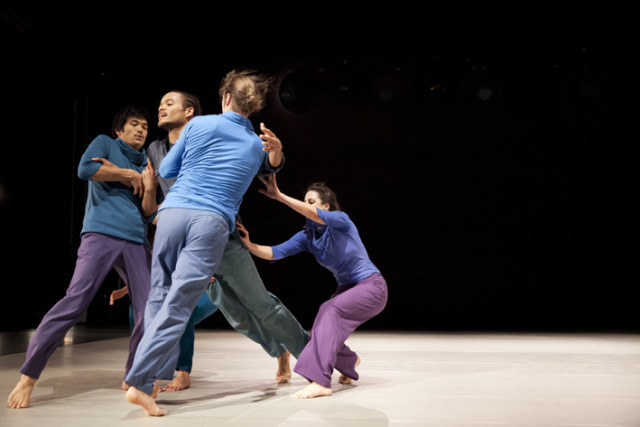 London-based Israeli choreographer Hagit Yakira has been making warm, witty, intimate works about human relationships since 2009.  …in the middle with you first aired in 2013, and the quintet is now touring the UK. Its two London shows have been and gone, but you can still catch it elsewhere in the country.

The piece blends familiar, pedestrian actions — walking, running, falling — with gently confessional spoken text and playful movement games. Takeshi Matsumoto tells us that walking every day can make your life better, a tip that seems to have as much to do with psychological wellbeing as with the physical health benefits of walking. Sophie Arstall tells a tender story about running with her father that stirs the cast into a frantic sequence of leaping and climbing.

Encouraged by Matsumoto — and tiny, nimble Mariana Camiloti — the cast plays a giant, graceful version of hot lava, spreading discarded clothing about the stage and leaping from island to island in search of safety. Arstall uses her peers as an extension of the task, clambering from one body to another without touching the floor. Each sequence that starts sweetly, playfully, has the capacity to turn into something darker, more brutally competitive, or with notes of emotional desperation creeping in. Yakira's choreography is built from simple materials, but it's eloquently crafted and beautifully performed.

A rousing finale finds the cast swimming towards us bodily down the stage, before erupting into a joyous final game of catching, falling and flying that lifts the audience right up with the dancers. …in the middle with you uses poetic physical language to suggest human relationships in various states of health and disrepair, from support to dependency, without hammering its point over-violently; and at 50 minutes in length, this thought-provoking piece clears off the stage before it wears out its welcome.

…in the middle with you is now touring other parts of the UK until 16 June. See the website for remaining dates. Londonist saw this show on a complimentary review ticket