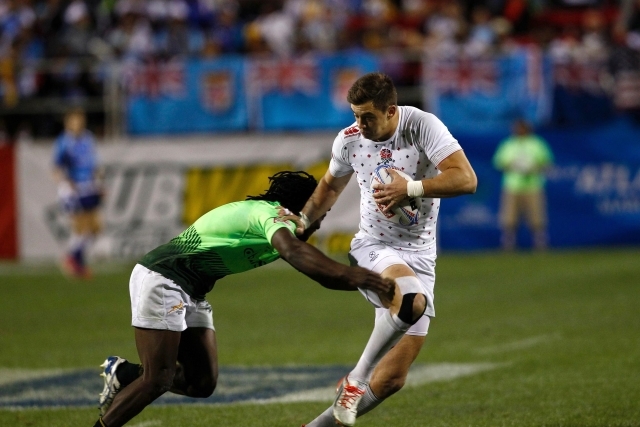 Cards on the table: Londonist doesn't really get rugby. The relative simplicity of football is obvious, and the hundreds of hours staring confusedly at men who seem to be doing virtually nothing, all in white, make cricket one of the most intriguing spectator sports there is. What can they be doing out there? Is this performance art?

But rugby? The idea is to get the ball from one end to the other, that much we get, but you're only allowed to throw it backwards. Unless you're planning to use planetary rotation to get it down there, how is that going to work? You also have a group of growling fat men in your way to impede progress. And you're surrounded by people dressed like Darth Vader, but we'll get to that.

Rugby authorities have long been aware of the madness of their sport, which is why they've spent the last few years carefully honing a version of Twenty20-meets-darts-meets-rugby that is currently dubbed the Marriott London Sevens, part of the Sevens World Series sponsored by a naughty bank. The event returns to Twickenham on 16 and 17 May, with added spice this year as the 2016 Olympics hove into view.

Yes, rugby sevens is now an official Olympic sport, which suggests there's a healthy spectator element to it, and Londonist indeed attended the event a couple of years ago and was genuinely impressed. (The fact you can drink in the stands is entirely irrelevant.) The basics of rugby sevens are that there are seven players per team, but hurling themselves about a full-size rugby union pitch. The result is matches with basketball-like scores as even the tiniest mistake can leave an opponent charging off into open field with the ball, and a lot of thoroughly knackered players at the end of it.

Let's watch some: here's the final of the 2012 event, which best typifies how this sport differs from its parent. With much more space to improvise, there's more considered passing and clever running than you find in the standard GET BALL CHAAARRRRGE version of the game, and all the better for it.

As for this year's competition, South Africa are the odds on favourites but Fiji could surprise a few people in the latter stages. The current standings show England in a healthy fifth place, and the unexpected sight of the USA taking an interest in egg-chasing without huge padding. The London leg of the series will see the confirmation of the four countries qualifying automatically for the Olympics.

These rugby sevens events are played in a similar carnival atmosphere to T20 cricket and this has led, for better or worse, to a lot of dressing up in the stands. Each year there's a theme — last year it was monsters, and this year there's a 'galactic' theme, so expect a few people breathing disturbingly in black flowing costumes and at least one fool screaming "To infinity and beyond!" throughout every match. Spot prizes are given out for top costumes and you can expect a video of England's sevens stars dressed up as spacemen to be gracing a YouTube near you soon.

The Marriott London Sevens takes place at Twickenham on 16 and 17 May. Tickets are available from Ticketmaster priced £30 plus fees for each day, or £50 plus fees for the weekend.