No Smoke But Plenty Of Fire At Bó Drake 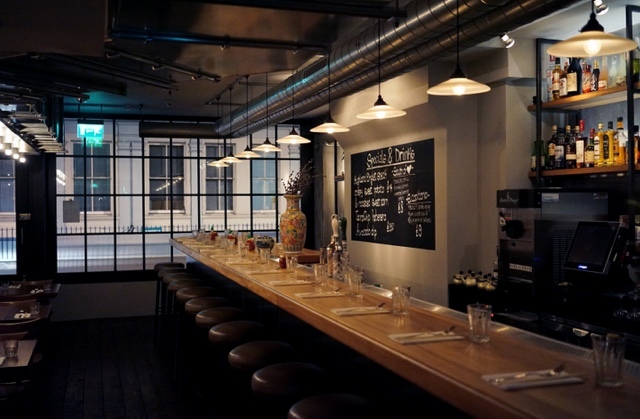 With its original opening date of last September pushed back and back, Bó Drake finally opened on Greek Street just a few days ago. There may have been no puff of smoke entrance, but owner Jan Lee (who is British born Chinese married to a Korean) plans to make up for that with the menu — it focuses on the traditional sweet and pickled elements of Southeast Asian cuisine, as well as dishes cooked with smoke and over fire. 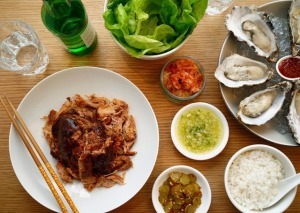 We dressed sensibly on approach, prepared for a similar experience to that at nearby Thai restaurant Smoking Goat, after which our clothes reeked of smoke for days. In fact, we half expected to be directed to the site by billowing clouds of the stuff.

But there was none. In fact the complete absence of smoke, the smell of it or any sighting of chefs setting things alight (although we did catch a barman with a lighter) was more disappointing to us than it should have been.

Still, it meant we had a clear view of the space. White and bright with shiny ventilation units — damn you, smoke removers — it’s dominated by a bar space and wooden benches for communal counter-style dining, though there’s also a row of booths for more social occasions. It’s (deliberately) basic, but a little (indeliberately) sterile.


The food is certainly not, though. Puffy bao (steamed buns) filled with subtly smoky beef brisket and pickled cucumber along with a barbecue-style sauce (£9) are a bit like succulent little doner kebabs with their flavour cranked up. Gooey slices of kimchi quesadilla (£7) are tangy comfort food, further enlivened by a roasted chilli dip. Baby bobo chicken (£9.50) has taste-giving black char marks but soft, succulent meat and sits in a kimchi-laced take on thousand island dressing. It’s named after this Chinese dish, but is really just a superhero version of Nando’s. The slow roasting of asparagus with soy and yuzu (£7) brings out a nutty magnificence in the vegetable, though the price is steep for just a few spears. A large pile of smoked pork ribs (£8.50) are the opposite, but they are Bó Drake’s equivalent of the dish your dad always left on the barbecue too long. Their potentially sweet marinade’s flavour is masked by bitter blackness and the should-be-succulent meat has shrivelled from the heat.

We can easily forgive the restaurant one cremation — especially so early in its life. But you know what, were the room filled with the atmospheric swirls of smoke and the tantalising whiff of barbecue, we might not even have noticed.

The only pud on offer for us (again, it's early days) was a palate-refreshing sesame ice cream (£3.50), which like the recommended Cucu Sour cocktail (£7 — a simple mix of gin and cucumber puree) is a soothing and well thought through contrast to the full-on flavours of the savouries.

A well-stocked bar means there’s no shortage of other drinks options, from Japanese whiskies and wines through to tequila, cider and Camden Town beers. Our servers were endearingly chirpy, and had good knowledge of the menu.