The parade of cinema halls erected in London in the early decades of the 20th century were monuments to yesteryear by the time the swinging sixties ended. The number of film-goers dropped by half as people became couch potatoes, choosing to lounge in front of Coronation Street rather than head out to the ornate Art Deco silver screens.

And so the old Carlton Cinema on Essex Road, The Rex in Stratford, Gaumont Palace in Streatham and many other screens began to close (and eventually end up as bingo halls, bowling alleys or churches).

But cinema in the late 1970s was about to undergo a rejuvenation by offering Londoners the bit on the side they weren't getting at home — sex.

"It's also why horror, martial-arts and other sub-genres became popular in the seventies," says Simon Sheridan, filmmaker and author of Keeping The British End Up: Four Decades Of Saucy Cinema, "TV was king, and the only option for the film industry to keep going was to show these niche areas unavailable on the small screen."

Yet sneaking sex films past the horn-rimmed gaze of the censor in Soho Square took some ingenuity. A film that led the way was The Garden Of Eden (1954) made in the guise of an educational nudist documentary. Still, the censor knocked it back, but in a clever ruse the filmmakers went to the London County Council for a special licence.

Similar battles continued throughout the next decade, but soon the penny dropped that when sex was paired with comedy, the explicitness seemed to be overlooked.

"By serving sex with a wink and a nudge, in the style and sauciness of Donald McGill's seaside postcards, it gave sex comedy films a traditional, very British feel that made them 'respectable' as light entertainment for the public to go out and see," says Sheridan.

The saucy Carry On films, popular since the late 1950s, must have also given filmmakers ideas. But these films only took it so far, with nakedness more implied than seen — even in the famous scene where Barbara Windsor's bikini top catapults away from her breasts.

And so came the low-budget, bizarrely plotted, early 1970s sex comedy: pictures such as Percy (1971), where the protagonist accepts a penis transplant which triggers him to track down the deceased donor.

But in the same year, a producer found a paperback in Paddington station: the story which would transform the fortunes of British cinema and spawn a series of films that would pack the London Pavilion cinema (now part of the Trocadero) month after month.

In Confessions Of A Window Cleaner, screened in 1974, and shot in Borehamwood and Barnet, Robin Askwith plays a young virgin whose job affords him ample opportunity to meet a succession of unaccountably available housewives. Though despite the number of romps, the lingering impression is of it being a blend of sitcom and a rites of passage film, where the insatiable sex drive of a young man has to overcome the incompetence of inexperience. It isn't exactly a moving film, but certainly suggests Brits do it differently.

The success of Confessions paved the way in 1976 for The Adventures Of A Taxi Driver. This is to some extent a copy and the characterisation of women is particularly poor (even within the confines of 1970s sex films). But the humour is visual and a little more 'sophisticated' than the usual double entendres. It's filmed entirely on location in London with scenes taking place on Lambeth Bridge and in Bayswater Mews. It's also famous for giving Robert Lindsay his career break and stars Diana Dors as the protagonist's mother.

"Without these films, actors as famous as Diana Dors would have struggled to work. And they wanted to be in them because they were successful projects to be associated with," says Sheridan.

Stanley Long was behind The Adventures Of A Taxi Driver and screened it in front of hundreds of London cabbies at the Casino cinema on Old Compton Street. It received a rapturous reception and went on to become a huge commercial success. 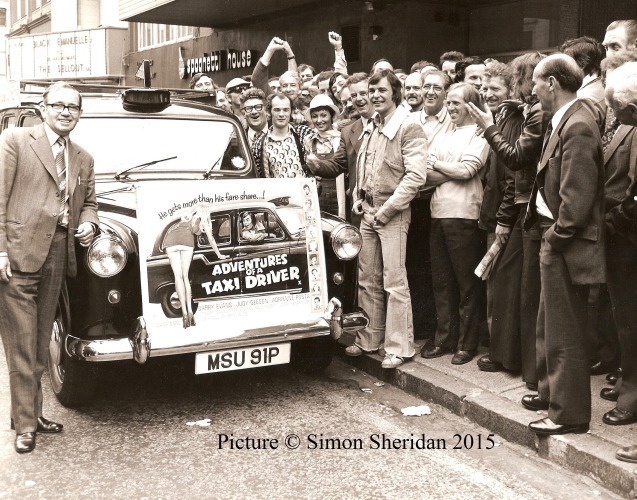 Long was also responsible for the high point of the era — Eskimo Nell — one of the few films to receive both commercial and critical acclaim. It's a spoof of the industry where a bawdy old ballad is made four times with varying degrees of explicitness. At a charity premiere the Queen arrives in Leicester Square to see the milder version, only for the hardcore version to be played.

Then there's Come Play With Me, about a health spa filled with randy strippers posing as health workers. It ran at the Moulin Cinema in Soho for 4 years. The success, however, was largely the result of the hype generated by David Sullivan (the current owner of West Ham United) who promised that the film would be the raunchiest one yet. No one seems to have told the director though, who seemed to think he was making something in the music hall tradition complete with cast sing-a-long. It is unintentionally hilarious with hastily arranged X-rated scenes obviously inserted after official filming had ended.

The increasing availability of video killed off this era of sex comedy. Furthermore, the video market also had a commercial advantage of unregulated censorship, at the same time as the rules became more stringent for cinema.

And with people satisfied to watch sexy videos at home, they no longer needed comedy to tempt them out.

Eskimo Nell is released on DVD and blu-ray on 16 February.