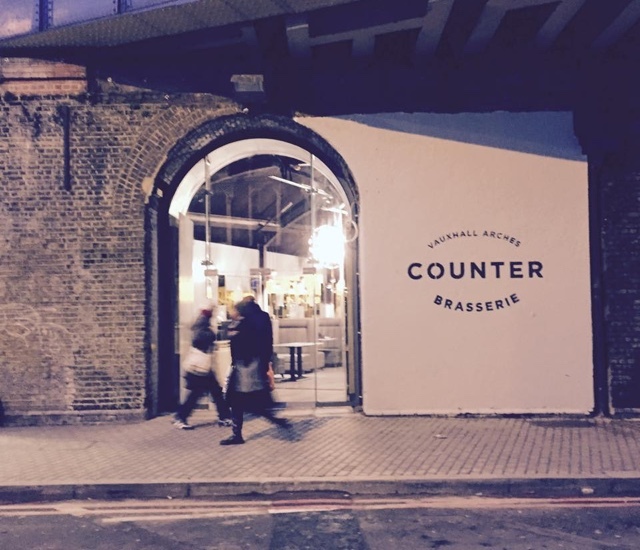 There’s been a fair bit of local buzz surrounding the arrival last week of Counter, under the arches by Vauxhall station. It’s not a neighbourhood that is as yet overrun with eating-out options — excepting the gay bars, perhaps — and so the idea of an interesting independent launching onto the scene is quite a boon.


It merges French and American cuisines to create a smart but relaxed eatery of the sort that’s more New York than London. One where burgers and cassoulet sit side-by-side on the menu, and fried chicken has a tête-à-tête with duck liver parfait.

There’s a touch of grandeur about the space, with a long shimmering bar skirting much of the elongated (it's 60m long) space, while its railway arch setting makes the desirable industrial look an easy one to achieve. Bright bar-hugging lights and elaborate modern chandelier-style fittings ensure there’s a fair bit of Vauxhall kitsch amongst the Soho cool, though.


To start, moules marinières (£8) — or mussels, white wine, shallots, garlic and parsley, as the menu reads — boasts impressively plump, soft molluscs and a big hit of garlic. Wild mushrooms in tarragon cream with a cornmeal gratin (£8) is less successful, lacking almost entirely in the promised cream. The dry (though admittedly tasty) mushrooms are something of a lacklustre topping for similarly disappointing shop-bought baguette. From the looks of rillettes and mackerel cured in locally distilled Beefeater gin which we catch sight of, we made a poor choice.

For mains it feels fitting to opt for dishes from both sides of the Atlantic. A very French cassoulet (£15) is crowned with a large and juicy-fleshed, crisp-skinned confit duck leg, while its hearty stew element is enriched with deep-flavoured merguez sausage. A cross-continental burger (£12.50) features rich Swiss cheese and caramelised onions as additions to a rare and impressively full-flavoured beef patty, all encased within a soft, deeply charred brioche bun — it’s a Yank in a beret. Accompanying fries are also well-handled, though the tangy homemade ketchup will no doubt divide opinion.


A homemade New York cheesecake (£6) with blueberries provides a star spangled ending, pulling together all the requisite creaminess, fresh vanilla notes and buttery biscuityness one could hope for.

Alongside an exclusively American and French wine list (from £18 a bottle), drinks options include American, Belgian and British beers — including a couple from Brixton Brewery — and a cover-all-bases cocktail list. Its Back Counter section opens next week, offering dedicated bar space for non-eaters, as well as regular live entertainment and private hire options.

We visited while the restaurant was still on soft-launch, so were willing to be lenient on the service, but as it turned out were impressed with knowledgeable and slick floor staff.

All in all, this railway arch eatery is well and truly on the right tracks. It’s already a justifiably exciting addition to its neighbourhood, and with a little oiling it could soon attract the attention of the wider London scene too.

Counter is at Arch 50, South Lambeth Place, SW8 1SS (next to Sainsbury’s opposite the bus station).