'Chaos' In Store For Brixton Commuters 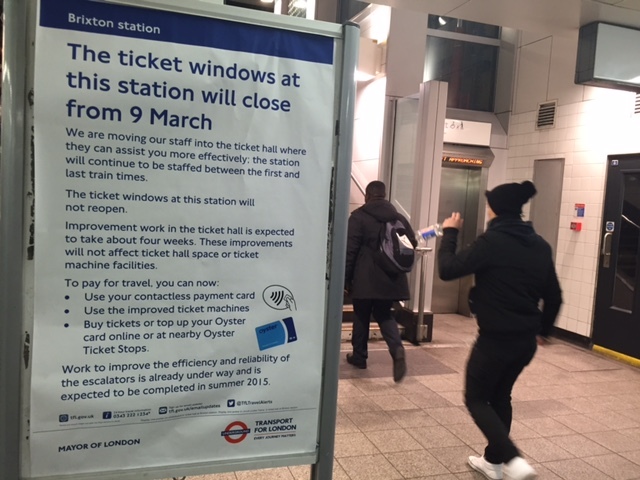 Passengers using Brixton Underground have warned of 'chaos' if Transport for London goes ahead with the planned ticket office closure at the station while escalators are refurbished.

On-going escalator works have caused major congestion with queues five deep stretching 100m at street level increasing waiting times to around 20 minutes at peak periods — just to get into the station. Commuters have raised concerns that with so many people in the ticket hall at peak times, commuters won’t be able to get to staff and this will cause more congestion. 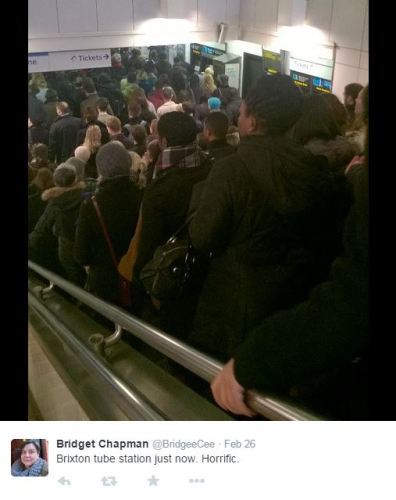 One regular user of the station, Bridget Chapman, told Londonist: “Closing the Brixton ticket office is the stupidest idea I have ever heard. If TfL want to cause chaos, this is the way to do it.”

TfL rather quietly started their controversial programme of ticket office closures recently and regular passengers using Brixton were advised this week that they will lose ticket office services for good on 9 March. TfL explained that two weeks before closure, communications go out to commuters, but did not have a central list of dates available to give us.

“While I can understand that the escalators are knackered and do need replacing, the decision to close the ticket hall at the same time is beyond belief. What hope is there now for those who struggle to speak English, or have specific issues? What is TfL saying to these people?”

“The queues, although ludicrously long, do move slowly – and they are bearable. But add the confusion of people not able to buy tickets and I think it will be chaos. Say what you like about the politics of closing ticket halls, but to do it in Brixton now is just ridiculous.

“42,000 get on at Brixton every single day, surely they deserve a couple of ticket windows at least?”

Nigel Holness, Operations Director at London Underground, told Londonist: “As part of our plans to modernise London Underground, from 8 March we will be carrying out improvement work at Brixton Underground Station. Staff will move out from back office areas to the ticket hall where they will be more available to help customers, and the ticket windows will close.

“The ticket machines will also have been improved before the changes to give better flexibility, including allowing staff to offer refunds.”

TfL also told us that testing had taken place at stations where planned ticket office closures were taking place, however this has not happened at Brixton as there are many machines in the ticket hall which are widely used.