Where To Find Squirrels In London

Squirrels — we love 'em, and certainly don't need an excuse to look at the creatures' influence on the city. And use some squirrel photos.

As most people know, the grey squirrel we commonly spot around the capital is an American species, with the first pair released in Henbury Park in Cheshire in 1876. It's not really known why this was done — speculation is that people enjoyed seeing the 'exotic' animals — and the Victorians had no understanding of the risks of introducing non-native animals to an eco-system. The releasing of the critters was only banned in 1930, but by then it was too late for most of the reds. Greys are better at finding food and shelter than reds — they also spread the killer squirrel-pox virus. They’re immune themselves, but the reds are not.

There are no native red squirrels in London any longer — naturally-occurring reds died out in the 1920s.

But that doesn't mean they're not occasionally spotted. Ian Tokelove from the London Wildlife Trust says one was sighted a few months ago [this was 2015], but the grainy photo taken showed a lone creature in poor shape.

“Misguided and unofficial attempts to reintroduce the red squirrel to London do take place, and at London Wildlife Trust we receive occasional sightings, but sadly these squirrels have very little chance of long term survival.” 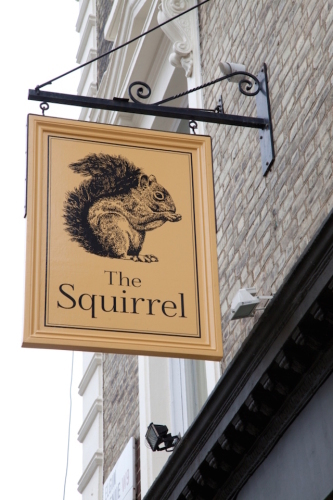 Where to see them

Squirrels are all over London, but perhaps the tamest of all are resident in St James’s Park. This is probably your best spot for a #squirrelselfie. If you want your squirrels a little less habituated to humans, check out one of the many nature reserves that London Wildlife Trust manages.

What to feed them

If you’re keen to feed them (though opinion varies on whether this is a good or bad thing, and there may be signs in some areas prohibiting it), they love nuts, especially unsalted peanuts. We found almonds to be a hit.

Where to eat them

If you prefer to appreciate squirrels through the sense of taste, there are places you can eat them. Although we've never tried it ourselves, apparently they’re best in the spring when they have been feasting on delicious young shoots, or in the late autumn having gorged themselves on nuts.

In Robin Jarvis’s The Deptford Mice trilogy, Morwenna is an evil squirrel who betrayed the realm of Greenwich. You wouldn’t want her digging in your geraniums.

On the other hand, Squirrel Nutkin may well have been based on a real London squirrel. Children’s author Beatrix Potter was born in Bolton Gardens, South Kensington. She grew up there and kept many small animals as pets — what’s to say a real-life Nutkin wasn’t one of them?

Street artist Roa painted a squirrel on Club Row in Shoreditch a few years ago. Sadly it's no longer there, but you can still see what it looked like above. There was also a squirrel painted by anonymous duo Squirrel and Boe in Tottenham a couple of years ago.

The native red squirrel has been a feature in art for centuries — they were kept as London pets in the middle ages, and this is reflected in artworks, many housed at the British Library.

If you fancy raising a toast to squirrels, why not head to The Squirrel in Maida Vale? The pub, run by ‘Team Squirrel,’ serves a mean Squirrel Steak Burger (although it’s made of beef, not the rodent).

Brompton Cemetery is supposedly haunted by a ghostly squirrel, often seen scrabbling about in the undergrowth. Interestingly, the sciurine spook is said to resemble a red squirrel which, as we've seen, have not been seen in London for many decades.