By Chris Lockie Last edited 81 months ago
Chris Lockie The Who, Van Morrison, Paul Weller To Play Albert Hall For Teenage Cancer Trust
Cancer's a bastard, everyone knows that. Most of us also know someone who's been affected by it in some way, and when the sufferer is young, it's all the more enraging. Thankfully we have a set of top-line bands and singers happy to donate a concert in aid of the Teenage Cancer Trust, the charity dedicated to fighting for young people aged between 13 and 24 — seven of who are diagnosed with cancer every day in the UK.

Tickets go on sale at 9am on 30 January, for a series of concerts at the Royal Albert Hall in March. Stereophonics kicks things off on 23 March, with comedian Kevin Bridges chipping in the following night and subsequent shows featuring Van Morrison, The Who and Wilko Johnson, Paul Weller and Johnny Marr, Noel Gallagher's High Flying Birds and US band of the moment Future Islands. 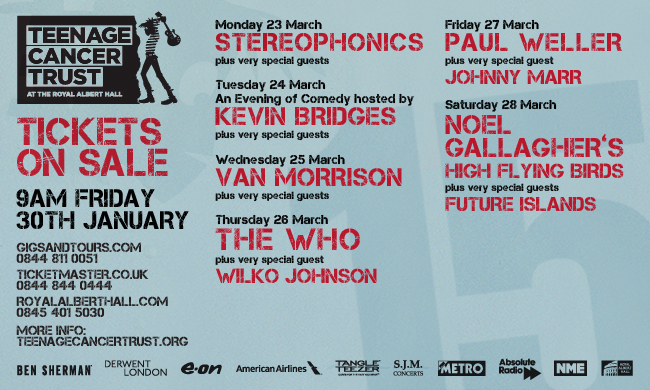 There's a pleasing reason behind the names on the bill — 15 years ago the Teenage Cancer Trust staged their first show at the Royal Albert Hall with The Who heading the line-up. They were backed that night by Noel Gallagher, Paul Weller and Kelly Jones, so this year's shows are a group of artists reforming, in a sense, for a thoroughly deserving cause. The 2000 show kicked off an annual event at the venue, with the likes of Ed Sheeran, Ryan Adams and Sir Paul McCartney taking the stage in recent years.

The Teenage Cancer Trust are as active in London as anywhere, in particular through their state-of-the-art Macmillan Cancer Centre at University College Hospital London, which opened in 2012. They can always use more donations, and if yours gets you a ticket to a great show at the same time, all the better.

Incidentally, if you'll forgive an 'in other cancer news' moment, a night featuring Howard Marks and Friends has been announced for 27 February at the The Forum in Kentish Town, to raise money for the care Howard will need having been diagnosed with the dastardly disease himself.