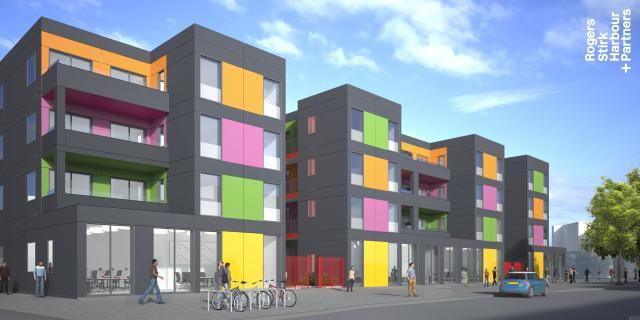 London needs to build more houses. We know this. But one of the many, many problems with that is it takes time to build houses. Planning permission has to be sought, funding has to be found, construction has to begin. All the while, people languish in expensive but crappy rental flats or on waiting lists. So how about building temporary houses?

That's an option Lewisham council is looking at to help ease the situation. The former Ladywell leisure centre on Lewisham High Street was knocked down a few months ago and, while plans get drawn up for what will happen to the site (unlikely to feature a cinema, sadly), the council's not happy for the site to sit around unused. Instead, they're proposing 24 temporary units, designed by Rogers Stirk Harbour + Partners.

The homes will be in situ for up to four years, cost no more than £4.3m to build, could be inhabited by this summer and are moveable to other sites when Ladywell is finally ready to be built on. The development will also feature eight ground floor units for business or community use (where we might often rail against every new housing project having a mini-supermarket underneath it, this location would be pretty horrible for someone on the ground floor).

Lewisham has around 600 households in what the council's Cabinet Member for Housing refused to call bed and breakfast at a recent meeting (because "there's no breakfast") and placed over 1,600 households into temporary accommodation between April and September 2014 alone. 24 new homes won't make much of a dent in that, sure; but if the idea is extended it could start to make an impact. As of September 2014, there were 45,810 households in temporary accommodation across London. Let's bring on the alternative, creative solutions and avoid situations like the Carpenter's Estate in Newham, where a huge estate is sitting empty while plans for redevelopment crawl along.