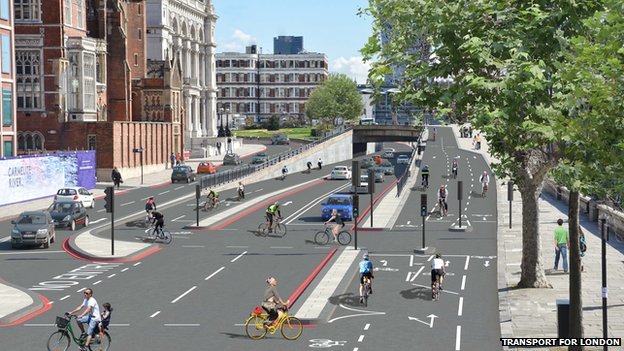 London Mayor Boris Johnson has given the go ahead for an east-west segregated cycle lane linking Hyde Park and Tower Hill.

The routes for 'Crossrail for bikes' were announced in September 2014, but sparked concern over reallocation of road space and the impact on pedestrians.

The original route started at Tower Hill, ran along Lower and Upper Thames Street via Castle Baynard Street, Victoria Embankment, Parliament Square, Hyde Park Corner via Green Park, St James’s Park, through Hyde Park to Lancaster Gate, then up Westbourne Terrace to the Westway and A40 to Acton.

The BBC's Tom Edwards reports that the plans have been tweaked — one of the existing four lanes will be removed instead of two at Temple tube station, Blackfriars Underpass and Tower Hill. This will doubtless provoke criticism as the reduction means fewer delays for westbound traffic at the expense of three feet of tarmac, but it's not the worst compromise we've ever seen. Plans to close Horse Guards Road and Storey’s Gate have also been abandoned. The Mayor said:

“Overwhelmingly, Londoners wanted these routes, and wanted them delivered to the high standard we promised. I intend to keep that promise.

“But I have also listened to those concerned about the east-west route’s impact on traffic. Thanks to the skill of TfL’s engineers and traffic managers, we have made changes to our original plans which keep the whole of the segregated cycle track and junctions, while taking out much less of the route’s motor traffic capacity – and so causing much shorter delays.”

The Mayor and Transport for London have been under increasing pressure to improve the capital's cycling infrastructure following a series of cyclist deaths and high-profile protests. The segregated superhighways are a key part of City Hall's £913m vision for cycling, which includes quietways and mini-Hollands.

Work on the east-west route could begin as early as April if the TfL Board gives the final approval, due on 4 February. London Assembly Labour transport spokesperson Val Shawcross said:

“Like many Londoners I am looking forward to such an iconic location becoming safe and welcoming for all cyclists."