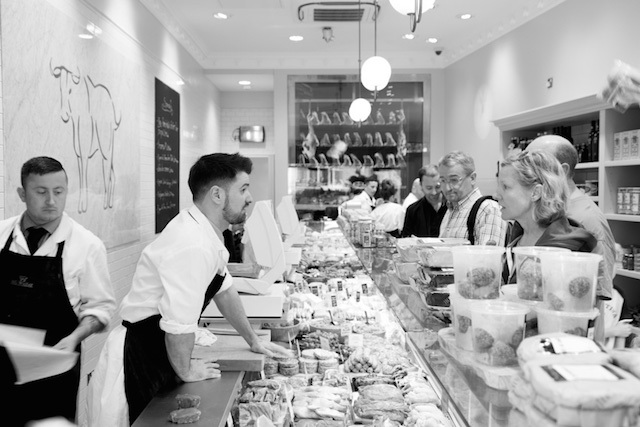 Located barely a minute’s walk from Barons Court tube station, this family-owned butcher isn’t really new, but it has recently undergone a massive £1 million refurbishment and relaunched with a completely different look. So, yes, it is as good as new. In the basement and on the first floor are more working, cooling, storage and preparation areas than before (all as sparklingly neat and tidy as the ground floor shop); plus an impressive new computerised system detailing customers’ orders.

Peter Heanen established the business in 1972 by taking over an existing shop called HG Walter and kept the name. Currently his three children Clare, Adam and Daniel run it (while Heanen himself was at the legendary Rungis Market near Paris on the day of our visit). They buy from small speciality producers and farmers around the UK who raise free-range, organically fed animals in the traditional way. The result is meat that’s highly acclaimed by a number of top food writers and celebrities, and the business has been voted ‘best small butcher in Britain’ and ‘best butcher in London and the South East’. They supply to over 200 restaurants, hotels and burger chains, but the heart of the business is retail. A team of 35 staff, including drivers, chefs and the night crew, works round the clock to keep up with demand. 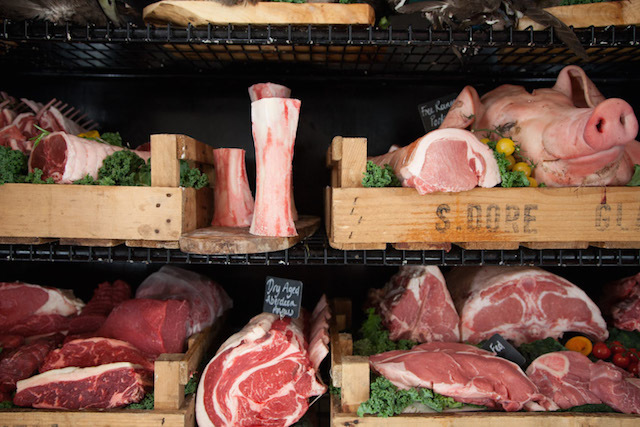 One of the major specialities here is pure-bred Aberdeen Angus beef, reared on open pastures in Ayrshire in Scotland. It has natural marbling, and is covered with firm fat that gives it a succulent flavour. They age prime cuts on the bone for a minimum of 28 days — and certain cuts such as sirloin are aged for up to eight or nine weeks — whereas many butchers don’t do so, in order to keep the costs down. Sirloin steak, for instance, costs £34.50/kg, and fillet steak £49.50/kg.

Lamb is a seasonal meat, so they source different breeds from different regions of the UK throughout the year. There are lamb loin chops priced at £18/kg; and unique to them is milk-fed baby lamb from the Pyrenees costing £30.50/kg. The pork comes from free-range pigs, slow-growing breeds that have been allowed to roam in fresh air; and milk-fed veal, such as rib-eye for £38.50, is from farms where animal welfare is paramount. The chickens are slow-growing, free-range and organic; and you’ll find popular items such as corn-fed poussin for £3.95 each, and chicken oyster thighs for £6.90/ kg. Speciality poultry includes boneless quail in a herby ‘French garden’ marinade at £2.80 each. There’s also some game available, though mostly during the game season from late summer to autumn.

There are more dazzling displays in the deli section of cooked and cured meats, pâtés, antipasti, sausage rolls, and sweet and savoury pies – and own-made quail scotch eggs (£4.50 for six) and shepherd’s pie (£4.50 small/ £9.50 large) are runaway bestsellers. The honey-roast ham has been highly acclaimed as ‘the best in London’, and a speciality is pata negra secreto at £32.50/kg, renowned for its exceptional taste. Prepared meats include pork and veal meatballs (£1.50 each), and lamb brochettes with mint and rosemary (£3.50 each).

Hand-made burgers (£1.50-£4.95 each) are in constant demand, and are made from (among other meats) venison, wagyu steak and pata negra. Bacon is dry-cured in-house with sea salt and unrefined sugars, and has a dry meaty texture and an old-fashioned taste. There’s also a good selection of sausages made to traditional recipes, popular with top chefs like Heston Blumenthal and Claude Bosi. Flavours include hot chilli pork (£9.90/kg), wild boar and apple (£12.90/kg), and chicken and apricot (£12.90/ kg). So there’s plenty of inspiration here for the barbecue season; and friendly staff are on hand to offer guidance and cooking tips.

In addition to meat, there’s a superb range of groceries, including pickles, sauces and mustards from leading brands such as Seggiano, Cottage Delight and Tracklements; plus olive oils, crackers, pasta, risotto rice, and soft drinks. Freshly baked breads are supplied daily by Millers Bespoke Bakery, and British and Continental cheeses come from the Rungis Market and various different suppliers, such as The Fine Cheese Co. A daily-changing selection of fruit and veg included, on our visit, cavolo nero, celeriac and unusual purple potatoes that looked like long, slender yams. The shop is particularly popular with Italian, French and Spanish clientele, as well as local account customers. London-wide home deliveries are available; and they’re planning to build an ecommerce website next, so you’ll be able to order online.