Graffiti is a generally accepted legitimate pursuit, used as lazy short-hand for ‘urban’ and as approved decoration for development hoardings. The confrontation involved in writing on a wall has been diluted and commoditised.

But before graffiti reinvented itself as artistic expression it was a good way to make yourself seen, and heard. Now instantaneous communication — and the rise of online petitions — makes a painted slogan seems old-fashioned, but the graffiti of the past is strangely hard to forget. The graffiti that has marked London over the past 50 years reveals instant messages that are political, surreal, particular, oblique or just plain direct.


This slogan, with its strangely formal use of an initial, referred to George Davis, who was jailed for 20 years in 1974 for robbing the London Electricity Board showroom in Ilford. The case against him was based on a questionable identification evidence, but it proved enough to send him down. When his appeal was refused, the ‘George Davis is Innocent’ campaign took a new approach. It came to national attention in August 1975, when campaigners dug up the pitch at the Headingley cricket ground, forcing the England v Australia test match to be abandoned. Other high profile stunts followed, with Davis’ friend Peter Chappell driving his lorry up the front steps of national newspapers and into the gates of Buckingham Palace. Roger Daltrey supported the cause and Sham 69 wrote a song about Davis. The slogan, sometimes written as “G. Davis is Innocent OK”, appeared all over London.

The pressure worked and Davis was freed by the Home Secretary in 1976. Eighteen months later he was caught red-handed robbing the Bank of Cyprus, and sent to prison for 11 years. He was back in jail again in 1987 for theft. But his conviction for the Ilford robbery was formally overturned in 2011, by which time sightings of the graffiti declaring his innocence had finally become rare. However an example survives, 40 years after it was painted, under a railway bridge on Salmon Lane, Limehouse.

2. Smash the Poll Tax/Pay No Tax


There seem to be remarkably few photographs of a slogan that defined its time. The Poll Tax, as the Community Charge was universally known, was introduced to replace the rates in England and Wales in 1990, having first been controversially tested in Scotland. It quickly became the focus of opposition to the Conservative government. The Poll Tax saga triggered an unstoppable chain of events and, only eight months after its introduction, Margaret Thatcher was defenestrated by her own colleagues.

Opposition peaked with the March 1990 Trafalgar Square Poll Tax riots, where the crowds carried “Pay No Poll Tax” placards, and daubed their slogan across the West End. “Pay No Poll Tax” and “Smash the Poll Tax” were painted on walls all over the city — and across the country — where they remained for years. Before the rebuilding of Hungerford Footbridge in 2000, the central pier carried the slogan in particularly large letters. Now, nearly 25 years after the event, the ultimate symbol of 90s London may have finally vanished.

3. Move Heaven and Earth to Defend the Life of Chairman Gonzalo


Strangely enough, the stencil graffiti of the mid-90s was dominated by the supporters of Peru’s Sendero Luminoso (Shining Path) guerillas. Their oddly-worded slogan, referencing apparently obscure events in South America, spread across London. It quoted a headline that appeared in the London-based “revolutionary” newspaper A World To Win, in September 1993. Chairman Gonzalo or 'Comrade Gonzalo' was the nom-de-guerre of Abimael Guzmán, leader of the Maoist Shining Path movement, whose insurgency against the Peruvian government began in the 80s and continues today.

It is not clear who organised the extensive graffiti campaign — although a Holloway Road squat was alleged to be involved — but they were thorough. The stencil appeared over much of London, spotted as far abroad as Acton Town and Tottenham. The campaign was a complete success to the extent that Guzmán is still alive, aged 80, albeit in a Lima maximum security prison. He was convicted in 2005 after three separate trials, and is serving a life sentence for terrorism and murder.

4. The Witch Is Dead But Spell Remains


The death of Margaret Thatcher in 2013 brought a nostalgic revival of 80s-style street protest and, briefly, the political graffiti that accompanied it. Slogans generally played on The Wizard of Oz. This particular piece appeared in a very prominent location overlooking the approaches to London Bridge Station, visible from every passing commuter train. It turned the Oz idea into a post-financial crisis critique, banging home its message with the help of a missing definite article. Its position on the roof of the Royal Marines Reserve building in Bermondsey contributed a level of irony. Both Marines and slogan have now departed, sealing the message in a moment that is forever 2013. 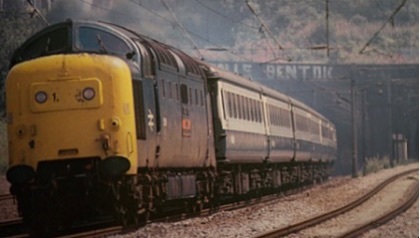 The familiarity to people of a particular age of an obscure inscription reading “M. Kahn is Bent” is down to The Mary Whitehouse Experience. The sketch show made the names of David Baddiel, Rob Newman, Steven Punt and Hugh Dennis. It started out on Radio 1 in 1989 and switched to television the following year. Both formats featured a continuing debate about the purpose of the cryptic M. Kahn declaration, which was painted in large white capitals on a bridge over the North Circular Road at Bounds Green.

Adolescent at first glance, the message in fact begged various questions. Why the strange use of a polite form of address in a giant, public accusation (reminiscent of ‘G. Davis is Innocent’)? Why the strange spelling of ‘Kahn’? And was the statement meant as an accusation or an advert? We can only speculate about the unknown effect on the man, or woman, in question of this national notoriety. The bridge was scrubbed clean at some point in the late 1990s, leaving such questions unanswered.


In the mid-60s, a London graffiti campaign was just part of Eric Clapton’s inexorable rise from obscure blues prodigy to international star. Clapton played in several bands after leaving school at 16, but found fame after joining John Mayall’s Bluesbreakers in 1965. “Clapton is God” probably started appearing around this time on various London walls, including at Highbury & Islington tube station. It reflected the debate at the time over whether Clapton was ‘the greatest guitarist in the world’. The photo above, neatly summing up the contrasts of mid-60s London, ensured its place in 60s mythology. It was also set up, on Arvon Road near Highbury Fields, for a book on Clapton.

In the 2000s, an anonymous, inspired individual sprayed “Clapton is Good” on a Lower Clapton Road hoarding where it remained for several years, damning both Eric and E5 with faint praise. 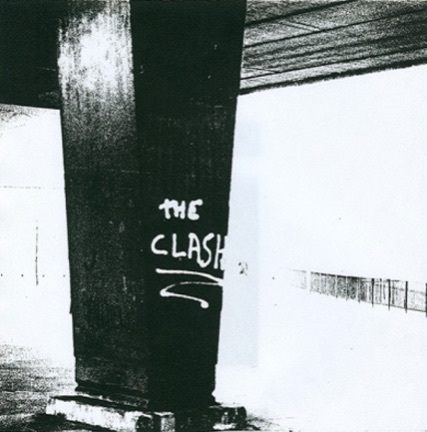 Both the origins and images of the punk era are closely linked to the streets around the Westway overpass, the ultimate 70s symbol of urban degradation and inner city unrest. This was Clash territory, and it said so, “The Clash” painted confidently on a concrete support beneath the Westway. Punk writer Jon Savage took an iconic photograph, similar to the one above, near Westbourne Park tube station during the hot, punky summer of 1976. Savage described it as “a psychic boundary marker for the group — this was their manor”.

The Westway was made to be sprayed, but these were the early years for modern urban graffiti. The Clash were out there on their own, defacing pristine concrete, in the place they loved best. As they themselves put in London’s Burning: “I’m up and down the Westway / in an’ out the lights / what a great traffic system.”

8. Far Away is Close at Hand in Images of Elsewhere...

During the 70s passengers sitting outside Paddington Station were treated to a carefully inscribed line of something poetic, its meaning elusive. At the time this was an urban mystery, but we now know it was the work of Dave and Geoff (full names still a secret). They began with a drunken “Be Cool, But Care” by the railway in Lewisham, and made it their business to serve Londoners with quintessentially 60s slogans. These even included “May the long time sun shine upon you”, a quote from the Incredible String Band’s A Very Cellular Song. “Far away…” combined two separate lines by the poets Robert Graves and Ruth Padel.

Despite its lyrical air, “Far away…” seems to be a fairly literal statement about the function of images, but it contributed a much-needed and appreciated strangeness to the grubby Paddington mainline. It has since developed an afterlife, becoming the title of a 2013 exhibition by artist Stanley Donwood who featuring the words on a blue plaque. According to Dave and Geoff, further appearances of such graffiti “cannot be ruled out”.

9. The Road of Excess Leads to the Palace of Wisdom


The late-60s/early-70s counter-culture was the golden age of ambitious sloganeering. Dave and Geoff were the tip of the iceberg. Writer Heathcote Williams was active on walls in Notting Hill. Peter Flack was known for emblazing stanzas from Shelley around Deptford Creek. However, the Situationist graffiti stars were King Mob, whose work has since been bought by the Tate. Based in a North Kensington squat, brothers David and Stuart Wise borrowed their name from graffiti daubed on Newgate Prison during the Gordon Riots of 1780.

King Mob’s posters occupied the same territory as the remarkable protest art of the 1968 Paris riots. However, they remain best remembered for a combination of pretentious and angry slogans in Notting Hill, the line above, a quote from Blake. Someone later improved it by changing the final word to “Willesden”. Their most prominent protest against conformity was painted alongside what is now the Hammersmith and City Line, between Ladbroke Grove and Westbourne Park stations: SAME THING DAY AFTER DAY – TUBE – WORK – DINER – WORK – TUBE – ARMCHAIR – TV – SLEEP – TUBE – WORK – HOW MUCH MORE CAN YOU TAKE – ONE IN TEN GO MAD – ONE IN FIVE CRACKS UP. Their misspelling of “dinner” appears not to be significant.

10. Who is Christian Goldman?


West London in the 90s was marked by a question, found on walls around Shepherd’s Bush and Notting Hill. The example above was taken on Ladbroke Grove. The slogan multiplied beyond the west, and Iain Sinclair spots in while walking Vauxhall in his 1997 book Lights Out for the Territory. He interprets it, of course, as “an alchemical/Rosicrucian riddle”, and comments that it must have been “composed by an initiate sufficiently overqualified to employ the correct punctuation mark”.

Some 20 years later, the question echoes around the internet, posed by numerous people on message boards. It seems that Christian Goldman was a US producer, and the graffiti a promotional campaign for a single called Happy Days, released in 1996. If so it was far from a success, and the music has vanished leaving almost no trace. However, the strange query has been left hanging in the west London air.