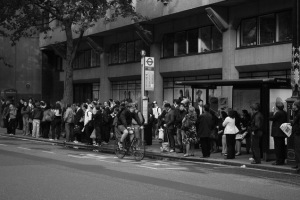 London's bus drivers started voting yesterday on whether to take strike action in the new year over 'disparities' in pay and conditions across the capital's bus operators.

The 20,000 drivers, members of the Unite union, say that unlike tube drivers, they don't have a London-wide deal to regulate pay, terms and conditions across all 18 operators. The strike ballot has resulted from claims that this has led to some drivers on the same routes getting different pay deals. Unite London regional officer Wayne King said:

“Pay on London buses has become a farce. You have drivers doing the same work, driving the same routes at the same time of day, but being paid different rates.

“Rather than one set of negotiations covering all of London’s bus drivers we have 18. It is not only inefficient but it is leading to pay inequality and resentment among the men and women who keep London on the move 24 hours a day."

Drivers in the union previously went on a 24 hour strike in November 2012, leading to disruption across London. And that was for just one bus company. The strike ballot closes on 18 December 2014.

Transport for London (TfL) recently announced it would bring 500 extra buses into service and spend £200m on improving the service before 2021.