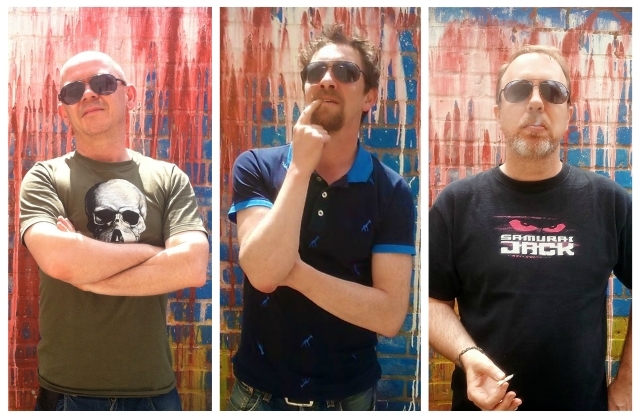 Bands get sick of being asked how they came by their name, but when you call yourselves Manilow you're virtually courting the enquiry. We'll let vocalist Dean Moston explain it himself:

"We always get asked: 'Why Manilow?'. Well, beyond the obvious irony and all of the anti-marketing connotations that go with it (we are pretty much buried on Google) the main reason is it's a tried and tested moniker: it looks great everywhere — from the lights of Broadway, to that big poster on the Elephant and Castle roundabout. How could we fail?"

With the greatest respect to Barry, we're of the opinion that the colossally conked crooner should be restricted to the Elephant and Castle roundabout (not the poster, just make him stand there) while the band who've taken his name should have their name up in lights in the Big Apple and beyond. Manilow are a brash flash of punk from Camberwell, with Dean joined by pals Paul Chamberlain and Gary Cardno. Their Sex Pistols-meets-Rakes power is most obvious in Cease and Desist, the lead track from their recent debut EP, though they've garnered comparison with Wire, Gang of Four and various other venerable acts anyone would be happy to be named alongside.

You can check out the EP yourself below.

The four tracks demonstrate a diversity that bodes well for this band, with Law Here a particularly fine example.

The band have been together for 12 months, and have taken Camberwell very much to their hearts. Dean explains how the EP was put together: "We recorded Cease and Desist in a small studio in an old soap factory next door to Anish Kapoor's workshop. It's a magical place tucked away between a huge council estate and Oval tube. The area is edgy, gentrified, ethnic, creative, dilapidated, cosmopolitan — all of the diverse things that London can be, rubbing right up against one another. The result is an air of friction but with endless possibilities. Conceptually and spiritually, that is very Manilow."

Their first gig was The Grosvenor in Brixton last year, a venue sadly now gone. Various small London venues have followed, and more are in the pipeline along with a planned radio session to close out the year. Your best bet is to keep an eye on the Facebook page for info while the band explain to wavering gig promoters that it's not a 71-year-old pop star born Barry Alan Pincus they're booking, but a trio of canny Londoners who might frighten the confused grannies in their audience.

See other London acts we recommend.