This is a sponsored article on behalf of Uncover. 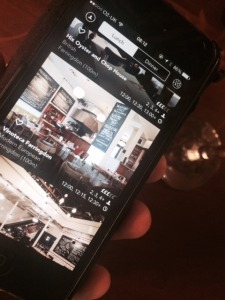 Rarely a week goes by without someone or other in the know declaring London’s restaurant scene the most dynamic in the world — and the constant stream of varied and vibrant openings we’re seeing is surely testament to this.

Our options may be almost limitless, but it seems like our demand is too. If you want a seat at one of the capital’s hotspots these days, you need either to book weeks in advance or settle for a long queue and a barstool.

That’s where new app Uncover comes in. It works with many of London’s top restaurants, tapping directly into their booking systems to displays only the one with space that day. It works for either lunch or dinner and users can scroll through the selection, viewing at a glance the times and table sizes available. One click brings up more information on a restaurant, and another will book a table — so there's no need to trawl through booking sites or make a phone call.

There are already more than 150 restaurants on the app’s books with more being added by the week. Those signed-up include Shoreditch newcomer Lyle’s, Michel Roux Jr’s Le Gavroche, Hawksmoor, Foxlow, Rotorino, Tramshed and titchy Kitchen Table, tucked away at the back of Bubbledogs in Fitzrovia.

As you can tell from the names above, the app only deals with high quality, independent eateries. The idea is that you can trust the ones they recommend to deliver the goods — whether it’s a famous big-hitter or a lesser-known gem you might not have found on your own. 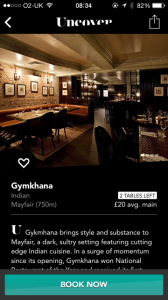 Results are arranged by proximity as a default, but you can also search on a map, or by London’s key dining areas, were you perhaps passing time in Shepherd’s Bush before meeting a friend in Shoreditch.

We gave the app a test ride over the weekend, and found we could book a Saturday night table at Gymkhana all of about four hours before we were due to dine. Not bad for a Michelin-starred curry house that's recently voted the nation’s best restaurant. We’d tried to book a table for that night two days before and been politely told that no tables were available.

People cancel hard-to-get reservations all the time and the real beauty of Uncover is that it gives its users a quick and easy way to see when this happens.

So, if you’re disorganised, indecisive or just plain spontaneous, why not give Uncover a go. And if you’re anything like us, you’ll also quite like the idea of restaurant roulette: hanging out in a pub knowing you’re going to bag a table at a top restaurant later, but not knowing which one it will be.

Uncover is currently only available for iPhone. Download it for free at the App Store.