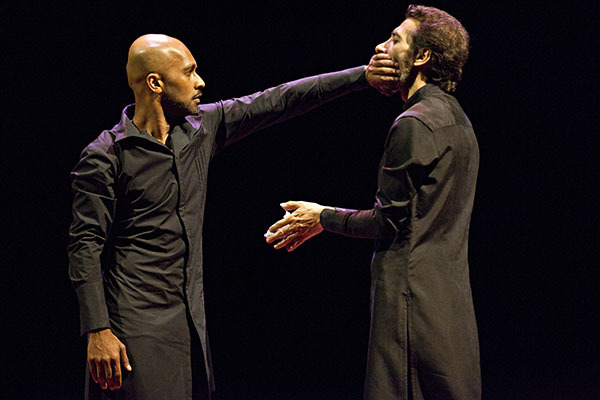 The always-watchable Akram Khan has been delighting audiences with his innovative combinations of kathak and contemporary dance for over a decade. No stranger to collaboration, this period has seen him work with artists as diverse as Sidi Larbi Cherkaoui, Sylvie Guillem and Juliette Binoche. This latest duet pairs the British choreographer-performer with flamenco superstar Israel Galván in a performance that puts the shared roots of kathak and flamenco through a blender to create a new and sometimes dazzling form.

The silence in which TOROBAKA begins brings new meaning to the phrase "hushed expectation". UK audiences are expecting something spectacular from the superbly inventive Khan and the number of Spanish voices overheard in the foyer suggests the pull Galván has on his home audience. The performance begins with a clapping of hands and a slapping of bare feet on the floor, rhythmic kathak cycles broken up with intricate flicks and taps drawn from flamenco. Rapid whirling spins from Khan's vocabulary are broken apart with syncopated body percussion from Galván's, the two swooping into bull-like charges and matador swishes.

The opening duet reveals interesting contrasts between the two master performers; while Galván's fleet footwork matches Khan's step for step, his upper body is wilder, looser and less precise than the serene Khan's. It's only when the Spaniard steps to the side for an eccentric solo of hip-snapping, ferocious foot-stamping and incredibly rapid finger-clicking that his flame comes fully alive. Galván is an electrifyingly sensual performer when given the opportunity to own the stage. It's an opportunity Khan gives generously, allowing Galván the lion's share of the stage time — a decision that will perhaps disappoint fans who have primarily come to see the British artist perform.

An international troupe of musicians provides a soundtrack melding Carnatic ragas with Hispanic harmonies, and quickfire mnemonic syllables with lusty Spanish counting. There's a great sense of camaraderie onstage, and the work feels like a passionate exchange of ideas — intermittently brilliant, rough around the edges and sometimes lacking in substance.

None of which seemed to bother the ecstatic crowd at Monday night's premiere. TOROBAKA doesn't quite offer the sublime alchemy of Zero Degrees or Sacred Monsters, but it does offer a rare chance to see two compelling performers pushing the boundaries of their respective forms.

TOROBAKA is at Sadler's Wells until Saturday 8 November.
Akram Khan returns to Sadler's Wells from 25-29 November with Sylvie Guillem in Sacred Monsters.
Londonist saw this show on a complimentary review ticket.