Behind The Beautiful Forevers Is Vibrant And Vital 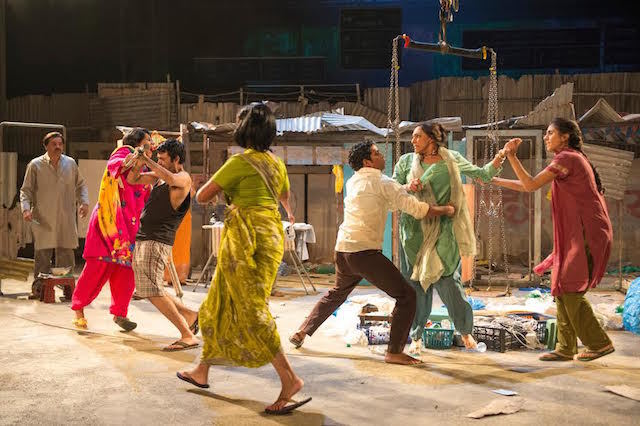 It's not merely a gap that separates Mumbai's rich and poor — more a yawning chasm that's very difficult to cross. And yet, the people of each extreme live virtually on top of one another: five-star hotels tower above putrid slums, and the grinning billboards that advertise Indian prosperity shield the eyes of the wealthy on one side from the miserable lives of the poor on the other.

It's in a slum behind one such billboard that the National Theatre's vibrant and vital new production of Katherine Boo’s penetrating non-fiction book takes place. Adapted by David Hare and directed by Rufus Norris (soon to take over as artistic director at the National), the play transports us to the Annawadi slum, in the shadow of Mumbai's busy international airport – the gateway to India's 'economic miracle'.

Huge jets roar over our heads and empty plastic bottles rain down from the rafters onto a sparse yet versatile set. This discarded waste provides a living for the play’s many characters. They are 'pickers', who collect the waste of the rich, then sell it on to be recycled.

At the centre of this desperate and grubby world is quiet and hardworking teenager Abdul (Shane Zaza), his headstrong mother, Zehrunisa (Meera Syal), and their relatively prosperous family — we’re not talking wealth here, they just have marginally more money than the other destitute slum dwellers. But when a feud with one of these jealous neighbours takes a shocking and violent turn, the family finds itself embroiled in a sinister and grotesquely corrupt legal system, where basic justice will cost every penny of their savings.

This and the other interweaving plots of Hare’s excellent adaptation are all bitter and sobering tales to witness, especially when considering their basis in fact. We are given an uncomfortable view of a world where life is dirt cheap and justice costs the earth.

Perhaps a more immersive experience might benefit the production: little is made of the sounds and smells of slum life. But it is a minor criticism. Overall Behind The Beautiful Forevers is a remarkable production, with a superb ensemble cast who powerfully convey the tragic sacrifices and swallowed principles necessary to survive in the underbelly of one of the world’s most powerful new economies.

If this is the kind of fearless, international work that we can expect more of when Norris takes charge of the National next spring, there should be exciting times ahead.

Behind The Beautiful Forevers is on at Olivier Theatre at National Theatre. Tickets (£15-£35) are currently on sale until May. Londonist saw this show on a complimentary ticket.