Oh dear, what can the matter be? People are getting locked in London all over the shop — literally, as in the case of one tourist on Thursday night, who found himself the focus of Twitter after getting shut into Waterstones in Trafalgar Square after it closed. 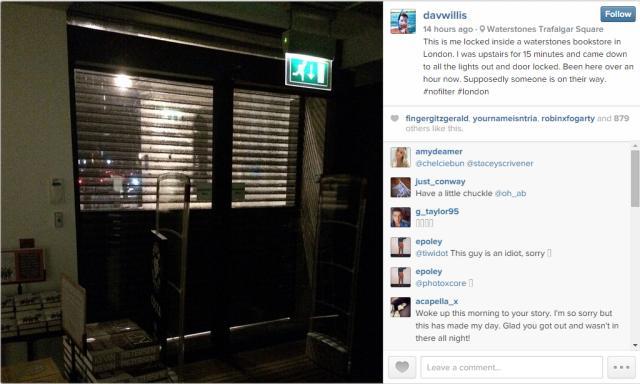 David Willis got an unexpected extended browsing session after staff presumably missed him while locking up. He was liberated around 11pm when he called the police, who in turn rang a keyholder. Waterstones has since produced a recommended reading list should anyone find themselves in a similar situation.

But the tale of the Texan tourist isn't the only locked in story doing the rounds today. Sheri Dykes recounts how she fell asleep on a Greater Anglia train to Chingford last Friday night, only to wake up at 4am in the depot. Realising there was nothing she could do, she went back to sleep again (we can only assume she's never seen the film Creep) and was woken by a member of staff around 7am.

It's easily done, this getting locked in lark. We went to the loo at London Bridge late the other night and on emerging found the station cordoned off around us. Which was fun. Got any tales of accidental after hours exploring you want to share? Comments are below.